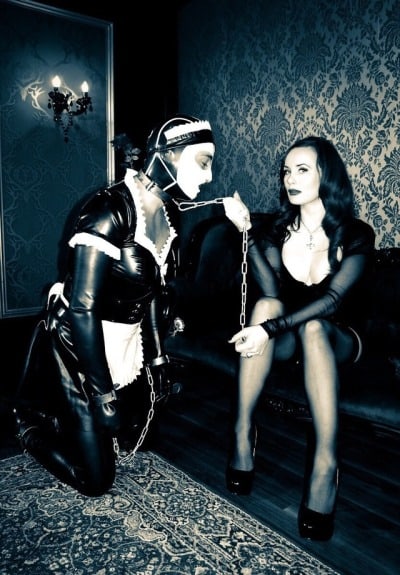 Males need to be forced

Some Domme’s believe that feminization is not necessary when dominating the male and that is true, it’s not. So why do I do it? First, look at what happens when you don’t. As a Domme, I can dominate a male by force or humiliation or blackmail. I can keep him naked and make him serve me as a servant but I always have a male serving me. I can tie him up, spank him, keep him naked or in a cage, but he is still a male and maybe even a man. As soon as I stop my control he returns to being a man again or at least a male.


Looking for kinky and agressive mistress near ?

So each time I want something from him I need to put some kind of “Force” on him. There is always the threat he may fight back or refuse and that means a lot of extra work for me. My primary reason for having servants is to reduce my work, thus this option does not make good sense to me. For those who truly enjoy conflict, maybe this is the way to go but for me, I want a well trained completely obedient and compliant servant who WANTS to and NEEDS to serve me without regard for his own personal desires. I want my desires to be his desires.

Feminization removes the man or maleness from his mind. It changes him into a sissy servant thus the male issues and problems cease to exist. Males come with a wide range of issues, problems, and faults. These can all be corrected through feminization.

Let’s examine a few of the leading problems. First is the male ego. Some have bigger ones than others but they all have it, they all are “men” in their own minds and nearly superhuman. This means they want control; they want things done their way, to look their way. What would a male say if you put him into a room decorated in pinks and whites and lace? HE would demand it be taken out. What if you bought a pink car, he would not only not drive it but would not ride in it.

How about you going out and spending time with other males? What if you held the remote? All these things have to do with the male ego and it’s a problem if you are going to have a compliant servant.

Another problem is giving

A male likes to give you a present and remind you he did but is he willing to do your laundry? Do your dishes? Scrub your floor? If he does he will remind you it was YOUR floor or YOUR laundry as if you are the one who is supposed to be serving him. Will he wait in the car for you while you are busy for one or two hours? But yet he would expect you to do so. You are expected to give as a female but as a male, he expects to receive all of these services and much more. This problem does not bode well either so must be dealt with.

Who wears the dress?

The list goes on but you get the idea. So how do you change all of this and not have to lift a finger or make a threat of a beating? Simple, you start wearing the pants and put him into the panties, bras, nylons and dresses. You make up his face and paint his nails. You tell him he is NOT a man, he is a sissy.

Yes, it is pretty much that simple. Let me assure you that when your husband or boyfriend is standing in front of you dressed as a sissy he will not argue, he will not threaten, he will not be a problem of any kind. It is so easy to mold a male into a proper sissy servant that it is beyond me why every woman has not done it. Really, it’s so simple and so wonderful. And what’s even better is once that male has relinquished control and accepted his new position as a sissy servant he likes it better too and wonders why you did not do it earlier.

The problem is that you have to force him first. You have to get him into girls clothing and let him see he really is not a man. Real men don’t wear girls’ clothes so if he does he is automatically not a real man.

But just any old clothes are not enough. You have to remember that males are raised through visual symbols. They have embedded into their small minds ideas that are representations of what they expect and what they expect others will expect. So think of feminine clothing as uniforms. Let’s start with a maid’s uniform. Simple to understand. Put the male into a maid’s uniform and he will instantly want to be the maid he looks like. Use plain ones for regular work and fancy ones for formal service.

At night put him into very feminine baby dolls with bows and pink slippers and a doll or teddy. Now he understands he is in nightwear and will sleep like a baby.

Work with his fantasies

If I have a party, for a sissy he must wear a fancy full petticoated little girl’s party dress. Not a pantsuit like a woman might wear. He is not a woman and he is not a man; he is a pansy and he must dress like a pansy. He must never think he is a man or even a male. He must be constantly reminded he is a sissy.

This is done, vocally, visually and by feeling. I make sure my sissy understands he is not a real man by being with real men. I make sure he feels like a sissy by wearing sissy clothes at all times and keeping his body free of hair and nails painted. I make sure he hears he is a sissy by reminding him of it. Things like “You’re such a wonderful sissy”, “if you’re a good sissy today I will get you some new sissy panties to wear when I go on my date Friday night”. Talk to others about him being a sissy so he can hear it. Let others see him as a sissy so you are not the only one. Never keep it a secret, let as many people know as possible so he cannot pretend he is a man.

But most of all always reward him for being a sissy. Tell him how much you like it when he is properly dressed when he serves you in front of guests and how proud you are. Reward him with a pretty dress or fancy panties or new make-up for things he does. Teach him to associate rewards with being a better sissy.

Sissy is the new normal

Now no matter what he is wearing or not wearing, he knows he is a sissy, he knows others know he is a sissy, and he can not escape from it. In a short time, he will learn to love being your sissy, dressing the part and serving you and your guests and then you have the best of everything and so will he because he will think only of you all the time. He will desire to serve only you or whoever you tell him to all of the time and his satisfaction will come from pleasing you.


Looking for kinky and agressive mistress near ?
Now you may want to think about your present situation and think about if you’re as happy as you can be, or if you should follow this advice and become very happy, very fulfilled and satisfied and see your male become so too.