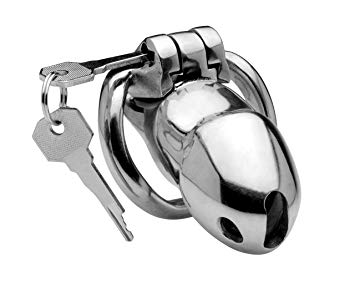 There are many possible reasons one might consider chastity such as:


Mistress is waiting for you near ?

While your reasons may change over time, I think it’s important to think about your reasons for chastity. Why do you want it? Perhaps you have no choice and are required to do it for a Master or Mistress, or perhaps you have a reason for doing it yourself.

Preventing Masturbation – Effective, though some report using cage “shaking” or vibrators as alternative forms of masturbation.
Preventing Erection – Effective against full erection, though you will get a partial erection in the cage that may generate dopamine pleasure much like you are “having sex” with the cage.
Preventing Orgasm – Partially Effective. You may still be able to have orgasms, though they will likely be less frequent, and of course, less macho-explosive.
Preventing Penetration – Effective, especially with a short cage like mine.
Unintended Consequences
Back pain – You may experience back pain, hip or leg pain, as chastity adds extra weight—especially steel ones—on a lever arm in the front, and may cause you to walk more bow-legged transferring weight to the outside of your feet. This is especially true if you try to take long loping straight-ahead male strides. Also, if you bend over from the waist—a no-no anyway—with the extra weight of chastity in front, you may put stress on your back. Remedy: sway your hips to even out weight distribution, take shorter steps, maintain a more upright posture with the neck stretched upward and chest thrusting forward. Do not bend from the waist, bend your knees or bend in a backward manner similar to Playboy Bunnies. In short, walk, bend, and sit more like a girl when you’re in chastity.
Infections – You may experience jock itch or urinary tract infections due to the accumulation of bacteria on the chastity device. Remedy: avoid bacteria-laden places like hot tubs, and clean clean clean, using alcohol, antibacterial soap, and antibiotics like Bacitracin.
Sports Restrictions – Some sports like running or bicycle riding may become more difficult for you until you are more used to the chastity and it doesn’t bother you. If you are able to play golf with the chastity on, you may actually find that it improves the rhythm and tempo of your swing! (Don’t tell Tiger. On the other hand, DO tell Lindsey!)

On Sizing and Cage Length

The other aspect of cage length is that you want to make sure you can fully void while locked in the device. I didn’t do this initially, so I sort of lucked out, but if you’re a grower like me you can measure yourself (again underneath from the base to the tip) while flaccid and taking a comfortable pee. Then, you would make sure the cage is no shorter than that measurement. This could be important if you suffer from prostate enlargement and subsequent urinary restriction.

They say to measure yourself at the thickest point with a full erection, so I did this and determined that I had a girth of about 5″. This would give a diameter of about 1.6″. However, the fact is that when the cage is on you can’t get a full erection, so I backed this off to 1.5″ to match the cage length. I probably could have gone smaller, but that seems about right. With an open cage like the MatureMetal Jailbird you will actually expand in the horizontal direction (through the cage bars) if you get really excited, and you’ll end up with “cage bar” marks. I’ve had them many times!

After measuring with a string, I started with a 2  inches diameter plastic ring on the CB-6000, but quickly got to the point of needing something smaller because of tessie “slippage”. The next size down was 1.75″ and, at the time, there was no way I could get into it. But, over time, my skin stretched and I was able to get into it by soaking in a warm bath to soften and loosen things up. I found that the smaller diameter steel ring of the MatureMetal Jailbird was easier to get into than the plastic, and once on, it was more secure and comfortable. I think the ring size should be tight enough to prevent slippage or pull-out, but not so tight as to cause chaffing or the cutting off of circulation.

My ring shape is round, because that’s what I was familiar with on the CB series. However, I had a lot of twisting problems initially that might have been solved with a slightly oval shape which is available also from MatureMetal. I don’t know for sure, but if I get another one I’ll make it oval shaped to find out.

Gap size is important because the bottom of the cage squeezes the upper part of the tessies to the bottom of the ring, thereby preventing the aforementioned “slippage” as well as making pull-out difficult. I have found that it is the gap at the bottom of the ring and cage that is the most important because that is where the real squeezing takes place (think tessie crushing!). With the CB-2000 there was enough “give” between the ring and the cage that the gap at the bottom was significantly wider than the gap at the top, hence I was able to use a 1/4″ spacer at the top and had enough room at the bottom. When I went to the MatureMetal JailBird I made the mistake of specifying a 1/4″ gap, not realizing that the MatureMetal steel design was tighter at the top and bottom, i.e., there is not as much difference, although there is some as the bottom does flare out a little with respect to the top. So, I had to send it back and have the gap (at the top) increased to about 3/8″ so the gap at the bottom would be slightly larger. As it turns out, my thickness where my shaft meets the tessies is such that it is still too tight. I have noticed a discoloration at the base over time, which is probably a cutting off of circulation, plus there is some chaffing and excessive redness at the base also, which sometimes makes it uncomfortable. So, yes, I should send it back and have the gap slightly increased at the bottom. (That’s an advantage to MatureMetal, they have excellent customer service). I’ve just been too lazy to do that and I didn’t really realize I needed to do this until having spent considerable time (228 days) in the device. As they say, you live and learn (hopefully).

Escaping from a chastity device

Some people feel that if you can escape from the chastity device, then it’s not true chastity. But, the fact is, you can escape from most anything if you’re really motivated. You can pick the lock, cut the lock, cut your way out of plastic devices (at the expense of ruining them), and even use special tools to cut yourself out of steel (though I would avoid blow-torches at all cost!) Some people can pull out of the back of the device, giving rise to a whole plethora of anti-pullout solutions, the most prominent of which is a Prince Albert piercing that can be locked to the device. Personally, I think the device should be secure enough that it would take a major effort, with possible risk of significant pain, to escape, but each to their own. You, or your Master or Mistress, must decide how escape-proof your chastity should be.


Hot keyholders are waiting for you near ?

You may experience burning, pinching, chafing, skin flaking, soreness, redness, blisters, scratching, edema, and bacterial build-up, not to mention possible painful nocturnal erections. The good news is the later goes away for most people over time. The bad news is that any of the former conditions can develop at any time. And they probably will, at the worst time, when you don’t have access to the key. You will need to learn how to clean your chastity regularly, while it is on, as well as while it is off. You will need a chastity cleaning kit/strategy and methods that work to reduce the pain of chastity when it occurs. Here you can read everything about cleaning and hygiene