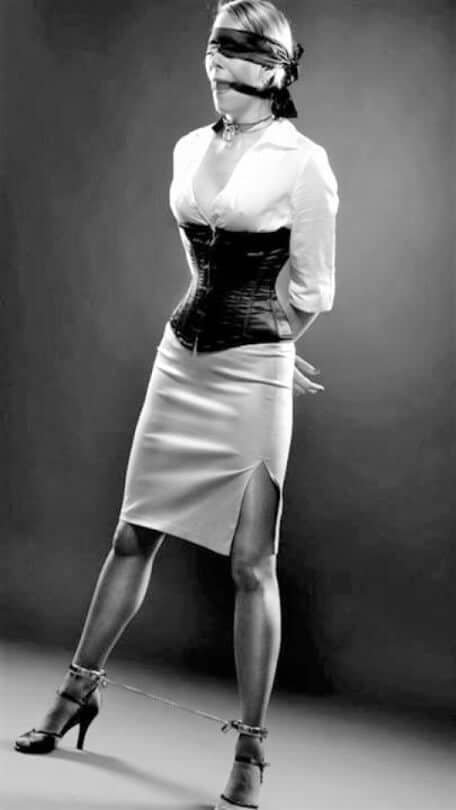 She was tied to the bed. Legs spread, fastened to a wooden post by a small length of chain attached to a black leather buckle around her ankle. She was sitting up slightly her wrists attached to her thighs by another set of black leather bracelets that connected her hands to her thighs, allowing her to only touch her pelvis and not being able to reach her pussy. Her small tuft of fur leading to her clit and opening that was already very moist. She had shoulder-length brownish black hair that fell in curls around her shoulder and neck. Round dark eyes with a narrow nose and full lips that were very moist and soft. Her breasts we round and hung slightly, pink nipples that were hardening, her breast heaved and she was getting excited, awaiting excitedly for what was going to happen. Her lightly tanned body was excited, her hips writhing slowly, she had curvy hips that gave way to slender legs, capped with toes that were washed in bright pink toenail polish.

Standing next to the bed beside her was Georgia, wearing a black leather bra, panties, and black high heels. Her left hand was on her hip, her right leg slightly cocked, and in her right hand lightly tapping her leg was a black leather riding crop. She looked at Monique contemplatively, studying her body, looking at the swell of her stomach the patch of black hair that adorned her pussy. Monique’s nipples were hard and she was looking into Georgia’s eyes.

Georgia brought the end of the crop lightly onto the erect nipple, lightly tapping and sending Monique into a low moan and oohing. Monique arched her back jutting her breasts forward to enjoy the crop on her nipples. Georgia noticed this and teased the nipples mercilessly. Lightly touching them, barely touching the round pink flesh that protruded from her. Georgia slapped the nipples with her riding crop, Monique loudly exclaimed her delight, moving her hips and thrusting her pussy forward as if she was fucking an unseen cock.

Monique moaned deeply, she was burning inside, wanting to let go, break through the wall that was holding her back. However, she didn’t want Georgia to stop either. The leather swatting her erect nipples was feeding her need to feel alive, feel every bit of everything around her. Being restrained only heightened her senses, she writhed against the bonds more, trying to exert some pressure on the sensation she felt between her legs.

“Trying to struggle are we” Georgia stated. A twisted grin on her face, she was running the crop in circles around the firm breasts and nipples. Georgia led the crop down her stomach to her belly button in between her thighs and along her legs. Monique squirmed and cooed.

Slap went the crop on Monique’s clit, a squeal emanated from Monique. Monique felt the warmth meeting the leather and wanted more. Monique wanted her pussy licked now, she wanted to feel naked skin against hers, she wanted Georgia to drape her nipples on her tongue.

Georgia continued “In fact, you have been a disobedient girl, you were flirting without me yesterday” Georgia continued to caress Monique’s nipples with the end of the riding crop, stiff, erect, and aching for touch. The firm round breasts heaved with Monique’s breathing, her dark eyes were fixed on Georgia, hungrily looking at her, Monique kept licking her lips, and turning her hips to feel something on her clit.

Monique saw Georgia turn and leave the room, Monique moaned, groaned, and writhed against the bonds, feeling the silk sheets beneath her, her pussy wet, dripping down to her ass. Monique heard some jingling of chains and could hear that Georgia was coming back to her. This excited Monique, she wanted to feel the crop, she wanted to feel the flog, the leather slapping against her body, the sensation of ecstasy that Georgia provided her. However, Georgia had a surprise for Monique.

Georgia entered the room leading a female by a chain that was attached to a collar around the neck. The female was bound behind the back, blindfolded and with a gag in her mouth. Her tits were supported by a black leather corset, large round breasts that bounced ever so slightly when she walked. She had light brown hair that was attached with a clip above her shoulders, just to make sure it didnt get in the way. Around her hips was a black leather thong, accentuating the long curvy hips. Attached to the thong was a large black strap on dildo, slightly curved it jutted out friendly in front of Georgia.

Her name was Constance, Georgia met her last week at the bookstore. She was younger than Georgia, not very experienced. As they talked, Georgia could tell there was a desire that was not fulfilled, a desire to experience pleasure, to have her body and mind pushed to the limits of pleasure. Georgia and Constance started talking about the health food-related books that they were browsing. Georgia commented favorably on Constance figure, Constance was wearing tight jeans that showed off her belly button ring, spiked heels, and a T-shirt that was two sizes too small, Georgia also noticed as they were talking that Constance nipples were erect, she wasn’t wearing a bra. Georgia saw the delicious opportunity to explore, to uncover this young woman’s desires and never hesitated. As they sat down for latte’s together Constance told Georgia about herself, her job(she hated it), her ex-boyfriend (jerk), and how she came to live in this town. After a while the conversation turned to sex, they began looking around at the people in the bookstore, how they thought the older guy in the fiction section looked like he had a hard-on, the two girls in the photography section giggling over the semi-nude pictures.

As they both took a sip from their latte’s, a comfortable silence come over them. Constance then said, “You know what my secret fantasy is ?”

Georgia looked at Constance and asked what it would be.

“Being tied up” Constance stated matter of factly, as a sheepish grinned crossed her lips.

Georgia then described to her that she enjoyed that experience too, but said she found something deeper behind it all. She found a connectedness, and bond that forms between two persons, or three, when someone has to trust someone else completely and totally. Georgia related her own awakening to this realization, Georgia spoke of her first time being bound, letting someone else dominate and control her. Giving up control of herself and her physical safety to someone else. Constance was riveted, never before had she met someone such as Georgia, who had the answers to all her questions. They ended up talking for the rest of the day, then making out in Georgias car in the bookstore parking lot. After caressing her nipples and making her cum with her fingers Georgia told Constance to be at her place at 6pm tomorrow night. Excitedly Constance said “Yes mam”.

Constance couldn’t see anything, she could just feel. Her heart was racing, her body was almost quivering, she was excited. Blindfolded she had absolute trust in Georgia. She felt a closeness to her that she had never felt in life for anyone, she felt vulnerable and secure at the same time. Georgia’s smooth hands tingling her body, lightly skimming her round nipples, up her neck, and caressing her chin. Standing there with the gag in her mouth she was breathing slightly heavy, the anticipation of what was next was moistening her. She could feel the strap on dildo pressing her clit, exciting her more.

Georgia then went to the bed where Monique was squirming. Georgia unhooked her ankle straps and lifted Monique up so she was standing beside the bed. Monique’s hands still bound to her thighs, she was slightly stooped. Georgia then led Monique to the raised portion at the end of the bed and told Monique to rest against the soft leather on her stomach. As she did that, Georgia reattached her ankles to the two o rings on the underside of each bed post. Now Monique was bent over, hands to the sides securely attached to her thighs.

Georgia looked lovingly at Moniques ass, two round, supple pieces of flesh. She caressed them softly, squeezing each cheek gently. Georgia then ran a finger inside Moniques wetness.

“Ooh” Monique breathed “Please can I have more than just one finger, please, please”

Georgia then crawled on the bed facing Monique, she grabbed the hanging nipples and lightly squeezed them.

“Now Constance baby, slide it in slow” Georgia instructed her, “Slow, let the head stay there, allow her to really feel it” At this suggestion, Monique moaned and wiggled her ass to feel the firmness of the toy. She tried to lean into the strap on, but Georgia had her nipples firmly and wasn’t letting her move.

While Georgia was playing with Moniques nipples, Constance was sliding in and out of Monique’s wet pussy. Hesitant initially, Constance was getting quite wet herself, feeling the dildo against her clit, she increased her rhythm while maintaining her balance. Not being able to touch the body in front of her was creating more excitement than she thought possible. Constance began slamming into her, deeper with each thrust gyrating against Monique pushing her back and forth, swallowing the strap on. Georgia was playing with Moniques nipples, telling her what a gorgeous woman she was, how her body was similar to the Greek goddesses she was reading about all the time.

Monique was in ecstasy, her body shuddered, her moist, wet pussy was dripping down her leg, satiating the dildo, moaning, she begged for Constance to fuck her harder. She could feel the balloon filling, expanding, winding up like engines on a Boeing 747, takeoff was imminent. Taxiing down the runway, Constance too was getting ready to take off, she felt the floodgates getting ready to burst. In unison both Monique and Constance let loose a river of orgasm, both shaking, Constance knees buckling out from under her, Monique body, stretched and tight as a rubber band pulled to its extremes, released herself and became limp at the end of the bed. Constance stood back, breathing heavy, she exclaimed through her gag the muffled sounds “Oh god”.

Georgia got off the bed, walked over behind Constance and kissed her neck, rubbed her shoulders and leaned against her.
” You were excellent baby, just beautiful” Georgia then released the bonds that were holding her hands behind her, removed the gag, and a blindfold. She then turned Constance around, wrapped her arms around her, hands slid from lower back to her ass, cupping each cheek, lifted her ass up and said “Were just getting started, my baby”

Last Updated on 9 months by pseudonymous