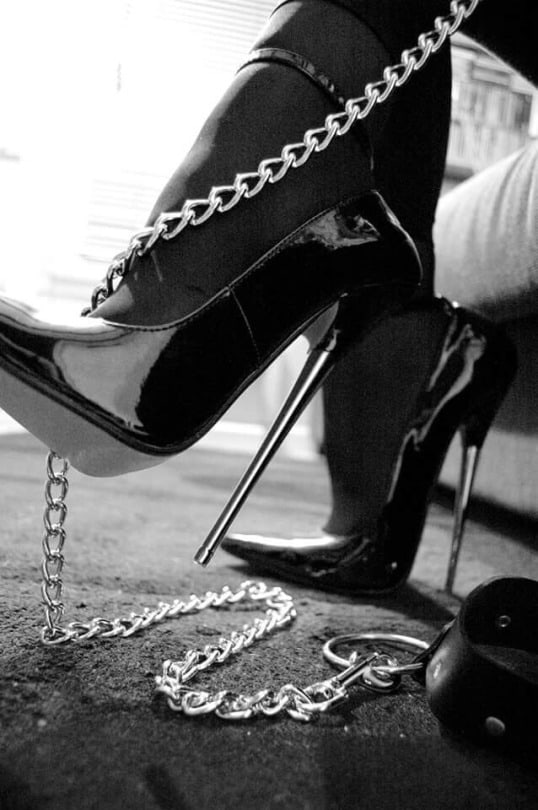 “You haven’t had a chance to meet Tanya yet have you?” Erin asked Wanda as they strolled down the block.

“No, but I’ve heard a lot about her” the full-figured woman replied to her thinner companion. “But I hear she’s a total pimp.”

“You have no idea girl” Erin laughed, smiling. “She’s got this little pussy white boy living with her, totally treats him like her bitch. Has his skinny ass running around there buck naked.”

“Buck naked you say” Wanda replied pausing to imagine the scene. “She fucking him?”

“Nah that’s the thing, I don’t think she fucks him at all. Just acts all mean to him, says he’s her slave.”

“Her slave?” Wanda asked her expression one of bewilderment. “Why would someone want to be a slave?”

“I don’t get it either girl, must be a white boy thing,” Erin replied with a shrug.

On the two dark-skinned ladies walked along the brownstone facades and curbside shade trees till Erin halted at a two-story red brick row home in the center of the block. She ascended the white marble stoop and knocked on the thick oak door idling against the wrought iron railing while she awaited an answer.

Tanya met the pair with a warm grin, her long black hair framing a round ebony face. She wore a black tee-shirt cut amply at the collar to expose the cleft of her voluptuous cleavage, and a tight-fitting pair of flannel boxers that hugged closely to the sinuous curves of her wide hips and thick thighs.

“Forgive my appearance,” she remarked at her casual attire. “You must be Wanda” turning to introduce herself to Erin’s companion.

The trio idled at the threshold making small talk for a few minutes before making their way down a corridor next to the stairway of the house, and through a doorway to a living room space in the rear of the house. Though briefed, Wanda was not quite ready for the sight that awaited them there.

The sound of R&B filtered gently through the rooms surround sound speaker system. An island counter separated the space from a joint kitchen to the rear. Knelt down between two black leather couches polishing a large wooden coffee table was Tanya’s slave. At the sound of the ladies approach, he stood at attention as best he could.

“Oh my god, where’s his dick!” Wanda couldn’t help but exclaim, laughter in her voice.

Eyes to the floor and face flushed red with embarrassment, the slave stood naked and shaved from the neck down. He stood bow-legged with a slight hunch due to the fact that his penis was tucked down between his legs.

“I tied the tip-off to a plug shoved up his lilly white ass” Tanya replied with a devious grin. “Keeps that little man clit of his out of the way, besides…” approaching her slave Tanya caressed his smoothly shaven groin, the shaft of his penis twitching in vain “He is a dick less little white boy, he might as well look like one. Ain’t that right bitch” Tanya said lifting her slave’s chin to stare daggers into his eyes. Suddenly, Tanya slapped him hard on the ass. “Get some drinks for your African masters, pussy boy.”

Erin and Wanda chuckled at the comment, as the boy jumped and made his way to the kitchen. Watching him go Erin noticed a tattoo upon his right butt cheek that read “Black owned.”

“Damn girl, when did you get him inked. That shit’s for real.” She said, taking a seat with Wanda on the leather couch.

“The other week” Tanya replied casually, taking a seat opposite her two friends. “I’ve owned him for a while now and saw it as only fitting to permanently mark him for what he is.” Turning towards the kitchen she watched as her slave uncorked a bottle of wine and poured three glasses. “If I had my way all white boys would be marked like that, in time I plan to have it done to my other slaves as well.”

“Five now” the host answered with pride. “This one’s the only one I keep around the house though,” she said gesturing towards the returning slave and his tray of glasses.

“How do you do it?” the newcomer continued, taking one of the wine glasses from the silver tray “And why so many?”

“Then how is easy” Tanya explained as she and Erin took their glasses, and the slave left to return the tray to the kitchen. “White boys are such natural pussies, they’re not like real men at all. There’s so many of them out their just waiting for a strong mama to come and boss their pathetic sorry asses around.” Chuckling she added “and unfortunately for some of them, I’m that mama” with a wink. “The ones that aren’t here I have put their little white dicks under lock and key for me, so they can spend their days frothing at the mouths going wild with frustration thinking about my black ass. It’s pathetic really.” Turning Tanya regarded her slave who had returned from the kitchen, looking him up and down she cocked and ear listening closely to the song currently playing on the living room speakers. “Dance for us bitch!” she ordered with another swat to his smoothly shorn ass cheek.

Somewhat awkwardly at first, the slave began shuffling his feet around and caressing his body in time to the rhythmic beat of the music. Giggling, Erin got to her feet and began circling around the slave bobbing in time to the music herself. Their conversation paused, Tanya and Wanda watched in amusement as Erin rubbed her body up against the slaves grinding her crotch into his ass and smacking him upon the cheeks.

“Makes me want to throw some dollars at him” Erin jested circling around the dancing slave studying his every move.

Smirking at her friends’ comment Tanya turned back to Wanda and continued. “As to why so many, slaves make great little cash cows.”

“Ha, they said you were a pimp” Wanda laughed. “What sort of movies?”

“Whatever I’m in the mood to make really” Tanya mused. “Ones where I beat his ass senseless or spread my butt cheeks over his eager little mouth. Sometimes I make him drink my pee, or my personal favorite where I slip all 10” of my black strap-on up in his tight little man pussy.”

Wanda winced at that last one, “Does he like that?”

Tanya laughed. “I don’t think so, but it doesn’t matter. Reminds him who’s in charge here.” She added turning to her slave and meeting his eyes briefly.

Still dancing he averted his gaze almost fearfully at talk of the subject.

Half bent over, the bitch started jiggling his ass as best he could.

“Faster cunt boy!” Tanya bade much to the birth of her two guests.

Still not satisfied, she had the slave kneel down on the ground. Pulling the back of her boxers down, and placing a hand on the back of her slaves head, she forced his face into the crack between her fleshy ebony cheeks. “Like this”, she said rapidly jiggling her ass in the slaves face.

“Oh my god” Erin said unable to contain her laughter.

Pushing her slave away, and adjusting her underwear, Tanya turned to see what it was that caught Erin’s attention. The piece of yarn holding the slaves dick back must have frayed over the course of the day and finally snapped freeing his erect penis, already wet with precum.

“I guess he really liked that” Wanda noted.

Laughter dying down Erin checked her watch. “We should really get going soon” She stated, referencing plans the three women had made to go out to a club that evening.

“You’re right” Tanya conceded. “Just let me put him away and change, and we can go.”

The two friends waited in the living room while Tanya led her slave back out into the corridor and opened a small slanted door that concealed a storage closet beneath the stairs. A pull chain on an overhead fixture illuminated the small space which contained varying whips, bindings, and toys hanging from a series of hooks on the larger of its two walls. Kneeling her slave down on a towel laid out on the floor of the space she restrained him with three sets of handcuffs; the first binding his ankles, the second his wrists, and the third connecting the two. Securing a ball gag in his mouth and placing an eyeless leather hood over his head she stepped back to admire her handy work. 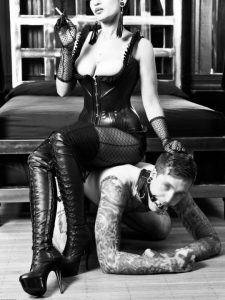 Leaning in close she whispered into her slave’s ear. “If you listen closely tonight, I may just come home with a strong black stud to fuck me like you never will” she sneered. “Pussy” she added in a sultry whisper. “Don’t worry though slut, I’ll leave you some company in here so you’re not all alone for the evening.”

With that, she reached around and flicked a switch at the base of the plug still inserted in the slave rectum. Immediately the slave started to make some muffled sounds from inside his hood and a faint buzzing sound could be heard as the toy began to vibrate. Chuckling Tanya considered the scene briefly, before snatching two binder clips from a side shelf and securing one to each of the slave’s nipples bringing about a higher-pitched squeal from beneath the hood followed by whimpering and heavy breathing.

“That’s better” Tanya stated at her handiwork. Satisfied she yanked on the pull chain above killing the light, and closed the door.

Pausing briefly in the hall Tanya listened closely for the almost inaudible sound of her slave suffering beyond the closed door. Grinning she made her way upstairs to change for the coming evening.