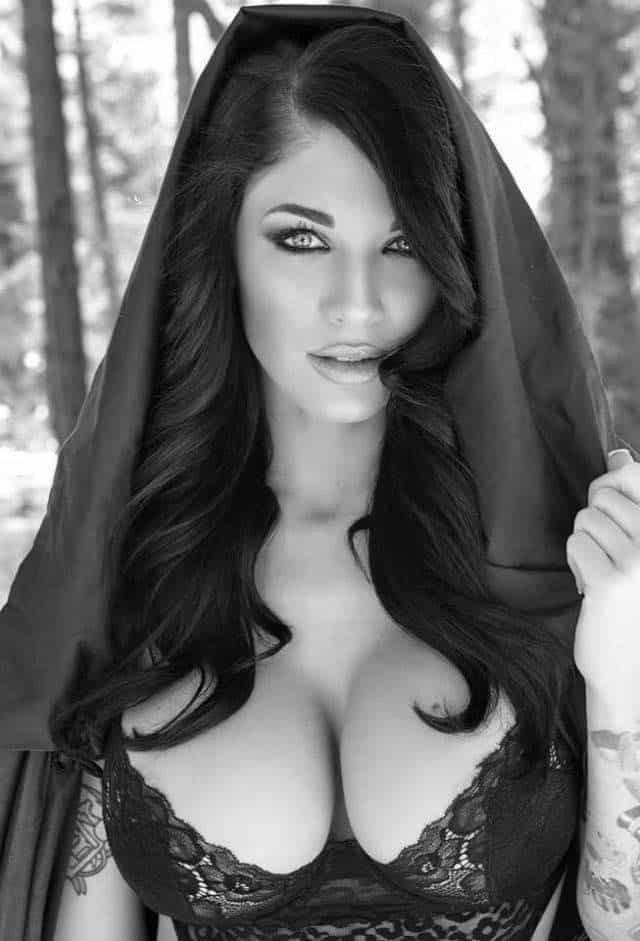 The Huntsman woke up seated in a hard, wooden chair in a large official-looking room. His head ached and he struggled to remember how he came to be in a room so unlike the rough pastures where he normally slept. Slowly, he started to recall being toasted and celebrated in the pub for his reported heroic role in saving the girl named “Red Riding Hood” and her aged granny. He vaguely recalled the excitement of the company of two beautiful women, whom he had never seen before, buying him drinks and cuddling up to him in the tavern. He smiled as he pictured himself bedding those two lovely women. Surely, such women were the ultimate reward for any male hero, but sadly one he had never known as a lowly and dirty huntsman. He wondered how he ended up in this chair, instead of a warm bed with a lovely female on each side of him.

Just then, a matronly woman entered the room, followed by five other mature women and a tall, younger woman. They were dressed in finely tailored clothes and at once he recognized the older women as members of the powerful women’s council of the nearby village. He had, however, never seen the younger woman before, who was wearing a rather revealing military-style outfit, complete with a long sword on one side, a knife on the other, and a spear in her hand. She was slim and strong and wore her hair in a long black braid, which swung from side to side when she marched in. The Huntsman had difficulty focusing on anything but this beautiful woman, who bore the look of the mythical Amazon warriors he had once seen in an old book. From his chair, he tried to stand up to show his respect for the authority of the councilwomen assembling before him but was instantly stopped by a sharp and severe pain in his groin. He groaned loudly and slumped back into the chair. Through his pain, he looked up to see that several of the women had heard his groan and were smiling or hiding their laughter with their hands.
The head woman motioned to the councilwomen to be seated and waved the young warrior to attend to the Huntsman, “Ursala, see that our guest is properly motivated to do what we ask of him.”
She then addressed the Huntsman directly, “Please do not attempt to move around much, as you will find it most uncomfortable if you do. Your testicles have been pulled through a specially cut hole in your chair and tied to a ring attached to the floor beneath you. We find that male prisoners seem to lose their desire to try to escape when bound thusly.”
The Huntsman was alarmed to hear the word ‘prisoner’, but more terrified at the way the woman had said “testicles”, and he tried to stay perfectly still. His large muscular body, hardened through years of the most arduous work cutting and hauling firewood, had been rendered helpless by a few inches of the thinnest wire, strategically encircling his most vulnerable parts. The Amazon went behind his chair and reached down to the wire and pulled on it ever so slightly. She smiled broadly when he grunted and shifted uncomfortably. She announced, “His testicles are securely fastened, High Mistress.”
“Excellent, we can proceed then. In the old days of the Matriarchy, we used to call those male organs the “orbs of truth” for only when a male is reminded of their fragility is he disposed to tell the truth”, the High Mistress calmly observed. Several of the women seated on either side of her nodded their agreement with this sentiment. The High Mistress then looked down at a parchment in front of her and then up at the Huntsman, “So, you are the great hero who saved a young girl and her grandmother from a vicious wolf, are you?” Not waiting for a response, she continued, “I have read the official report sent to the Provincial Governor by our esteemed Mayor, my husband. Is this exactly what happened, Huntsman?”
“Yes, ma’am, I mean High Mistress, it is as written…….UGH!” Ursala had given the wire another slight pull.
“Do not lie to this council, foolish male!” the High Mistress warned. “You are here to ‘testify’ in the true sense of the word, as your testicles will bear the consequences of your lies.” She looked back at the document in her hand, “This parchment contains just the sort of nonsense my husband would cook up to avoid uncomfortable realities and keep power firmly in the hands of your foolish gender. Take care, Huntsman, we are not fools and are not to be trifled with.” With that, she nodded to Ursala, who drew her knife and held it poised underneath his chair.
The Huntsman’s eyes darted around wildly and, since no male is courageous when faced with the unspeakable, tears started to well up in his eyes, “Oh, High Mistress”, he began to sob, “It is all a lie. The Mayor told me that it had to be so because the truth would raise certain unsettling questions in the people. He said in everyone’s best interests to change the story, especially mine, for I would be a hero. He said since no one knows the girl and her grandmother, but me and they live so deep in the woods that there would not be anyone to contradict the version he reported.”
The High Mistress sat and smirked, “Tell us the truth, then, great hero, but take care that it is the whole truth, for the maiden behind you has her pruning knife drawn and I believe it has not tasted a male since the Spring bull castrations.”
The Huntsman swallowed hard and told this tale:

The High Mistress sat back in her chair, “That sounds more like it, Huntsman. Clearly, my husband did not want a story told where women successfully defended themselves against male aggression, without male protection of course.”
The woman to the left of the High Mistress added, “Those distinguished men in the Mayor’s office are terrified of women publicizing the weakness that swings between the legs of everything male in nature, and how it is a natural fighting tactic for all things feminine to exploit that weakness.”
The High Mistress nodded, “So true, so true. They are fools to think they can keep that genie in its bottle forever.” She laughed at her own analogy, “When we need to, we will rise, seize the males by their weakness and rule over them, but why bother now. Let the fools think they are in charge.” She then noticed the Huntsman, smiled, and ordered, “Ursala, dispose of the male as you see fit.” With that, she and the five matronly women filed out.
Alone with Ursala, the Huntsman was both nervous and excited. She peered over his body to notice that his manhood was standing at full attention. She smiled as she pulled out her short knife, bent her body back down, and reached under him. With her free hand, she joined her thumb and forefinger in a circle around the base of his ample scrotum. She then let her other three fingers wrap around his testicles, first loosely, then tighter. He sat up very straight as her other hand, the knife hand descended under the chair. “Snip” was the sound of ……the wire being cut. She let it fall to the floor as his heart almost stopped. Gradually, it dawned on him that she had let him stay intact. Yet, she still had complete control over him.
She put her knife back in its sheath but held him helplessly with her other hand. She did not ask him, but told him, “You are a big healthy buck and now I take you as my mate. You will serve only me and father my children.” She then let his balls swing free but held them figuratively in a vise grip for the rest of his days. He would not have wanted it any other way.