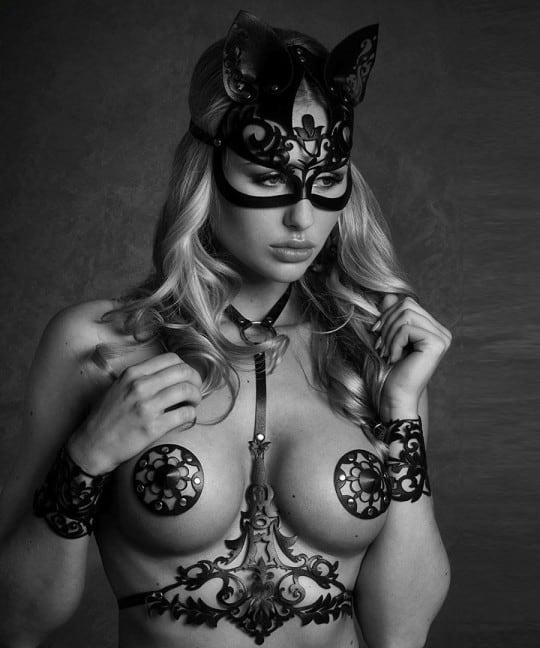 She had grown comfortable and safe within her environment. The cinderblock walls around her and the bars of the cage that contained her were now her home. Early on she used to keep track of the days by the sounds of the steps overhead and the long intermittent silences in between. She knew that a series of two of those silences would occur between his visits. That must be a day she thought. She had come to understand the silences were likely the time he was either sleeping or gone from the house, probably at work.


Really, she lost track a long time ago but instinctively she knew when the time was drawing near for him to come to her. In the time between visits she would nestle herself in the cage he kept her in. In the beginning, she would fight it, desperately trying to find a way out. It was futile. No amount of yelling, screaming, pounding on the bars, nor yanking on the lock would prove to be successful. Eventually, she grew tired and gave in to the inevitable. She was stuck, captured, possessed. Convincingly she told herself it wasn’t so bad. She was fed enough to be comfortable and the room, although it had no windows was warm. Considering the lack of sufficient clothing she was thankful for the warmth.

At times it was quite difficult to wait for him to come and allow her to visit the ensuite bathroom. Early on there were times, only a few, that she could not wait. The ensuing punishment for such mishaps taught her quickly to learn how to make sure she could wait….no matter how long. She learned to simply keep her back to the room while she lay in her cage so as not to see the ensuite, so close and yet so inaccessible without his allowance of its use. The bathroom thing was what made her wonder the most just how long she had been staying down here or was it up here; she had no idea. Just how long had it taken for her to train her body to deny itself of such natural functions. It didn’t matter anymore. It had been long enough for her to realize that. That and the reward of a shower for being able to hang on, as opposed to the denial of one if she hadn’t. It no longer amused her how now the little things mean so much to her….a a shower, the use of a toilet, the touch of another human being.

She could sense the time was here. He would come to her very soon. Oh how she looked forward to those moments. In the beginning, her heart would pound with sheer panic when she heard the clank of the locks opening behind the door. Her heart would still beat harder in those moments now but more in anticipation. She heard the familiar sound now and the slightest of smiles graced her lips.

“Hello my pet,” he pleasantly cooed as he walked through the door, ’how’s my girl today?’ Why he asked amused her in away. He knew she gave up speech and language a long time ago. Perhaps she simply forgot he figured, although she always seemed to understand what he’d say. Her communication now days consisted simply of various grunts, groans, purrs and the like….and of course, the sobs and screams that were inevitable at his hands. Long ago she gave up wondering why he did the things he did to her. She just knew to accept them. A part of her grew to enjoy it; it was the only attention she received. He knew this and teased her often.

“Oh, come on now girl, why the tears? You know you like it, don’t try to pretend differently. Your body tells me so,” he’d quip. “As long as your body keeps betraying you like that my little pet, I promise to keep giving you what you obviously want.” And with that he’d always chuckle to himself, amused by his own joke.

Today was a good day. She was happy to see him and he could tell by the way she sat up when he walked in; up as much as one could in that cage. He never stopped admiring his handy work. The hard work and effort he’d put into building that thing, just for her, was evident to him each and every time he ran his hands over it….and she always watched. She watched his every move, always. She had become, over time, fixated on him. He was her entire world and that was exactly what he wanted. Sometimes he was certain that he could almost hear her purr as he slowly sauntered around her cage, chattering away to her but mostly to himself. He often wished he had noticed the day she said her last word so that he could have marked it on a calendar. Once in a while, when she would make one of those sweet little murmuring sounds while she fixed her gaze on him, he’d get a slight tingle through his body. In those moments he sort of missed the sound of her voice. Then he would remember back to some of the vile things she uses to spit at him. Her rage with him had run deep, very deep. Those were the early days though and for the most part he didn’t miss them. As much as he longed for the sound of her words he didn’t miss having to punish her for such terrible disrespect of him. He truly didn’t enjoy it at all. It wasn’t like the other stuff. “Now that stuff, that stuff is fun,” he thinks with a grin.

He’d continue talking to her as he walked away venturing into the ensuite to run the shower for her. He looked after his pet well.

Once the water was on and the towels laid out he’d come back and unlock her cage. It really was a work of art and very comfortable too. No barbaric dog cages for his pet, nothing but the best and he was very proud of it and of himself and in fact, also of her. She had learned to behave whilst he went about unlocking her from the cage, no more half-crazed, wild ambush attacks in an attempt for freedom. Secretly he was very impressed at how long it took to untrain her of this nasty habit of fighting back. Her strength and determination had always impressed him even as it frustrated him. Oh how he hated having to punish her like that. Never in his entire life had he ever heard another human being screech such unhumanly sounds like the ones she made when he had to teach her a lesson. She’d never know it but he would often break out into tears of his own once back upstairs and alone. He really did feel badly but it had to be done. She needed to learn, to conform, to submit to his will. And learn she did.

But that was a long time ago, so long ago. She was such a good little thing now. He was as pleased with her progress as he was with his own patience.
“Come now,” he called to her, “come clean yourself up and do your business you filthy thing you”. She would always grunt in embarrassment when he said such things. He remembered how proud she was before he claimed her. Always primped and made up. No need for such things now, no one to impress but him and to him she was beautiful as she was because she was his. He just enjoyed teasing her.

It was odd how he always gave her privacy in those moments. Very odd considering some of the vile, humiliating things he always had planned for his visits. She had given up on modesty far too long ago to even remember it existed. She had grown to accept that he knew every physical fiber of her being so there was no point in trying to pretend otherwise. Besides, with no mirrors she had no idea what she looked like anymore anyway. How she appeared relied solely on what he said. If he said she was ugly and shameful looking she believed it and sulked accordingly. When he said she was pretty, beautiful even, she postured with pride. When he was pleased with her so to was she.

Upon exiting the ensuite she never knew what to expect. The unknowing would always make her shake a little with both fear and excitement. That and the fact she knew she would eat if she complied easily, had made her a most willing victim. The exhaustion of fighting back from the torture and the ensuing, seemingly endless amount of time without food or water, had taught her that to resist was pointless. Some may have felt it not worth surviving in such an environment but she had learned it was her life now, her world was his world; his fantasies her reality.

When she came out she could see the room laid out, preparations made for the coming endorsements. He always had a plan. Her only plan was to comply, do as told and all would be ok. She knew that somehow he would never quite go too far even though it always seemed like this time would be the time it would be just a little too much to bear.

Some rituals, like the showering beforehand, never changed. She stood there, clean bodied and wet haired and obediently waited for him to come to her…and come to her he did. As always, he walked toward her stopping only when he was a mere inches from her face. Then, as always, as she tipped her head up to gaze into his eyes, his hand would glide up and reach gently into her hair and rest at the nap of her neck. The sweet, gentle kiss would always follow. She would dream often of that kiss, the silken feel of his lips to hers, his warm breath fanning out over her face as his tongue would slip between her parted lips. Somewhere in that moment is when he always startled her blissful state with a stark, violent jerk of her head as his hand forcefully gripped her wet hair and his chuckle would turn to a menacing growl.

“BITCH…. my lovely bitch,” he snarled as he dragged her, by her hair, across the room. “Come along we have work to do, lots of time for that later,” he’d say with a laugh, a frightening, spine-tingling laugh.

She knew if she could just get through it he’d look after her; lovingly hold her and tend to her wounds once he was done inflicting them. She could sense that this time would be one of those really difficult, long lasting times and it worried her but she would get through. She would look at him with pleading eyes and pray that he would show her some mercy….she knew he would not. But she knew that after, he would allow her to curl up into him and he would stroke her hair as he mused about anything that came to mind. She didn’t care, she didn’t listen…she simply hung on to the sound of his voice as she would fly and drift and stare at her cage. The lovely, comfy little safe haven where he would eventually toss her and sit across from it and admire her. She would be able to feel the contentment that matched the calming gaze he would bestow upon her but for now she would have to wait because first would come the pain, the tears, the blood, the fear, the……