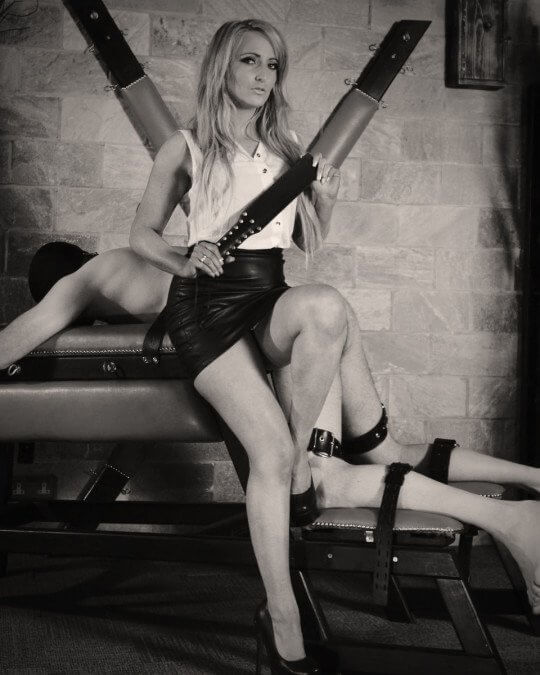 This wasn’t the first time he had been in the House, but he had never been in the Pledge Room. Alexandra had arranged it with her sisters, and that was all she would tell him. It was hot, with a slight breeze. Now he sat on the floor, waiting. He had a pair of her panties stuffed in his mouth as a gag, and another over his face, like a blindfold. This was something that would normally get him hard, the taste of her registering on his tongue and the smell of her in his nose. But the thought of all these new girls seeing his shame made his blood too scared to travel far from his heart.
In a way, that was comforting. Alexandra had driven into him that he was small and inadequate, and if he was soft and hidden, then he would prove to be pathetic like she wanted. And he wanted to please her.

He had to be a good boy

There was a rush of air and a gradient of sorority perfume mingled with the smell of Alexandra’s pussy. He twitched, but that was all. The flushed face underneath the stained cloth. He felt them form a half-circle around him. No muttering, just silence. And then Alexandra’s voice: take off the blindfold, puppy.
He did as he was told, tossing her panties to the floor. She was in the middle, slightly in front of the other girls. Gorgeous, like a goddess surrounded by pretty priestesses. A table next to Alexandra held a ruler, clover nipple clamps and the dildo, disconnected from their strap-on harness.
“Aww, puppy, I told you to be ready for us. I know it’s little, but you can do better than that can’t you?” She waited for him to nod, “do you need some help, boy? Ok, you may touch it, but you have to look at everyone here. Do you want to be my good puppy?” She took her panties out of his mouth and tossed them next to the other pair.
“Yes, Alexandra, I do.” She smiled down on him, and he touched himself. At first, it was nothing. The situation was too surreal. He met the girl’s eyes and stroked. Going down the row, one by one. Some smirked, some giggled. Some were straight-faced. Passing Alexandra’s reassuring smile, he began to stiffen; this was for her and he could do this.
A girl turned to whisper into her sister’s ear and they both tittered, their eyes pointing at his growing cock. That did it. Alexandra spoke, “there it is! In all its…glory.” And she giggled. “Good job, my pet.”
He thanked her and focused on staying hard without touching. It was difficult. He wanted to touch now. Throbbing inside and out.
“So, what do you think, girls?” Alexandra asked. One of them asked how big it was. Alexandra laughed, “let’s measure.”
He swallowed as she came toward him holding the ruler and sat next to him so the girls could see her measure. She took his cock in her hand and held it up straight, putting the ruler next to it. He twitched against her warm fingers. “Damn, I was hoping it had grown. Unless I’m reading it wrong?” She looked up at the rainbow of girls, told one of them to double-check her measurement.
The girl walked over a grin on her face. He blushed as she knelt beside Alexandra and took the ruler. “Oh my gosh, that’s hilarious!” She looked at him, “Five inches? How do you jerk off?”
Alexandra giggled, “maybe we should have him show us!” All the girls ooo’ed in agreement. Alexandra lead the girl back to the group and motioned that he should begin.
He grasped himself with his middle finger, index and thumb and slid down and up. There was laughter and he looked at the floor. Alexandra told him to keep eye contact with everyone. He reluctantly did. Stroking, feeling high on humiliation and exhibitionism. Alexandra told him to show the girls what it looked like if he jerked off like a man, so he wrapped his whole hand around his cock and was rewarded with laughter as he hid himself.
“Do it like that for me, puppy. Pretend you’re a man for us. Wow, us with you,” and she paused, “copious amounts of cum.” She smirked.
He tried as hard as he could, but the grip wasn’t good enough. He grew soft as he failed to come for her. “what’s the matter, puppy. Need some help? Come on, jerk for me, you can do it. Who’s a good boy! Yes you are! If you come, you’ll get a surprise. Go ahead and use your fingers. We all know you’re not a man.”
He thanked her and stroked vigorously. He glanced down at Alexandra’s panties and she noticed the direction of his gaze. She smiled and nodded, “you may.” And he picked up the closest pair and brought the crotch to his nose. Her scent was like baptism and he swam inside her smell.
The buildup started a war. Each passing eye contact emphasized his complete submission to Alexandra, but each stroke told him he was a man and going to shoot out like a cannon. He could feel his cum traveling as he battled between contrasting thoughts of worship and animal orgasm.
He inhaled with quick sniffs and focused on the beautifulness of her face. Her dominant, arrogant smile. He’d shower her in his cum.
So close. He was floating. Faster, her eyes, glowing with twisted and perfect love. He moaned and thoughts of manliness drifted away as he came all for her. His everything, his always.
The girls laughed, but Alexandra told them to shut up. She came over to him, gently took his hand holding her panties away. She stroked his cock gently, feeling the slipperiness of his cum. She kissed him, “good boy.” She licked her finger and grabbed his arm, standing him up with her.
She told the girls, “we’ll be back in a little bit, and you will all act as if this never happened.” She put her arm around him and lead him to her room.

They entered her room. She released her arm from him, closed the door and stood in front of him. She kissed him, stroked his hair. “I’m proud of you. Did such a good job.” She kissed him again, sucked on his tongue.
She walked him to her bed and had him lay down on her lap. He said, “tell me things, please?”
Alexandra shushed him and said, “it’s a fine cock. You know it only matters what I think, right?” He nodded, moving against her lap, nestled in her perfect thighs. “It’s just the right size for…hey, do you want your surprise?”
He sat up, “yes please!”
“Eager, much?” she smiled, but she rose and unzipped her pants, slid them down. The white of her thighs, bright against her black panties. His eyes instantly found the darker splotch on the fabric. His mouth began to water. “Tell me you want it,” she said.
“Very much so!”
She moved in front of him, dancing. Her hips swaying.
He watched her like he was praying.
She hooked her thumbs into the waistband and pulled them down. A natural tease, she always stepped it up for him. The softness of her mound, that gentle slope down to the top of her clit.
He swallowed, entranced. The only colors his mind could see now were goddess white, sex black, and lust pink.
The fabric pulled away from her, glistening strands of wetness snapping from the cotton to cling back to her lips. “You want it, huh?”
“Yes, Alexandra!”
In one fluid motion, she slipped her panties the rest of the way off and turned around, her ass in his face. She spread herself and commanded, “lick it.”
He gasped. He had wanted to lick her ass forever, but it had always been a hard limit. She was self-conscious. Needlessly, he had always thought.
She whined, “don’t you want it?” she thrust it into his face. As an answer, he tentatively kissed the curve of her cheek, and then licked it. He moaned.
Alexandra came slightly out of scene space and asked if she smelled bad.
“No, sweetie,” he sniffed her, loudly, “you are amazing.”
And with that reassurance, she said: “lick it then, you little slut.”
He smiled and lapped at her sweaty, pink asshole like a good puppy.