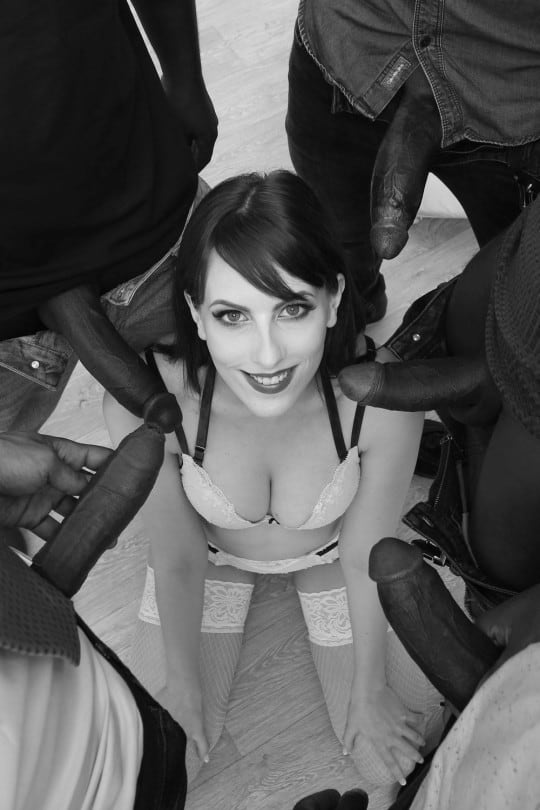 I was walking home from work one summer evening, enjoying the sultry mid-western night. Having just finished a shift at Cinema X, where I worked as a stripper, I was wearing a lace teddy with jeans and a lightweight tailored leather jacket. While I didn’t mind the long walk at all, I was pleasantly surprised when a car pulled up and a deep voice asked if I’d like a ride. My pleasure doubled when I realized the car held four very nice looking black men, all about my age or a few years older.

Uncharacteristically, I accepted the ride. As soon as I climbed into the back seat (one of the men got out so I could sit in the middle) the guys immediately looked me up and down and one of them asked if I’d like to stop by their place for a smoke along the way. Although I was a stripper, believe it or not, I was actually very shy and insecure. In fact, it was only while working as a stripper that I finally developed any sort of positive body image of myself (perhaps that night was part of it). And I’d always been fairly tame sexually except for the occasional threesome with my former housemate and his friend. But for some reason, I was feeling adventurous this particular evening, so I again accepted their offer.

When we got to their house, we all sat in a circle in the living room. They offered to take my coat, but I refused, suddenly feeling shy again. After a little ‘puff-puff-pass,’ however, I relaxed a bit, and when they next offered to take my coat, I stood up and slowly unbuttoned it. When I handed the jacket over, one of the guys whistled long and low and I swear another one just groaned. Even at 19 and a size 8, I was still a DD-cup, and the red and black lace teddy was showing off that fact quite nicely.

Immediately, the guys surrounded me, and their appreciative hands were all over me, squeezing my breasts, pinching my nipples (which to this day weakens my knees if done just right), and undressing me. In no time at all, I stood before them all, totally naked and soaking wet. One of them stood behind me, grabbed my hair, and pulled my head back, while he whispered in my ear that he wanted me to get down on my knees. I immediately complied, and in a flash, one of the other guys moved a hard-backed chair around in front of me, sat down, and pulled his beautiful cock out. Knowing what was expected of me, I took him in my mouth, feeling him get harder as I did so. The guy behind me still held my long hair and used it to guide my head up and down over his friend’s raging hard-on for a minute or two, telling me what a good little cock-sucker I was. Then he released my hair and got on his knees behind me and slowly slid his huge cock into my dripping pussy. He was much bigger than the guys I had been with before him (he was the first black guy ever to fuck me), so it hurt a little as he stretched me open, but once he got all the way in, I came almost immediately! The guys all loved that and started to root him on, telling him to fuck me nice and hard. He took their advice while I swallowed a load of creamy cum from his friend. As soon as I finished sucking the first load down, another guy sat in the chair and fed me his cock. I LOVE sucking cocks and was thrilled to death, but I admit it was hard to concentrate while the guy behind me was fucking me so forcefully–not that I was complaining; I’d fantasized about rough sex while still a virgin! Not to worry though; he soon came with a roar and was replaced by another cock sliding into my drenched cunt (this was back in the 80s, before condom use was the norm). From that point on, the night was a blur of cocks and cum, both in my hungry mouth and in my now thoroughly stretched pussy. I was flipped back and forth from my back to all fours, and fucked by each of them at least two or three times. At one point, I ended up in the bedroom being fucked very roughly by the aggressive hair-puller, and when he started telling me what a dirty little slut I was, and how he loved fucking my tight little pink cunt, it only made me want more. I felt like I’d never really been properly fucked before that night.

After I’d been used by each of them repeatedly, I heard them go wake up another housemate upstairs. The housemate protested that he had to work early, but they told him he wouldn’t want to miss the surprise waiting for him downstairs. He came into the bedroom in his bathrobe, and when he saw me on the bed, he grinned sleepily. He opened up the robe and told me to start sucking. He was still fairly soft, so I took him into my mouth and started to suck the blood into his lovely chocolate cock. There are few things I love more than feeling a cock harden and fill my mouth, knowing that it’s hardening because of ME. When he was fully erect, he started swearing and muttering under his breath, calling me a sexy little bitch and telling me that I was going to make him fill my whole mouth with cum, and I’d better not waste a drop. Before long, he did, and I didn’t.

Last Updated on 6 months by pseudonymous