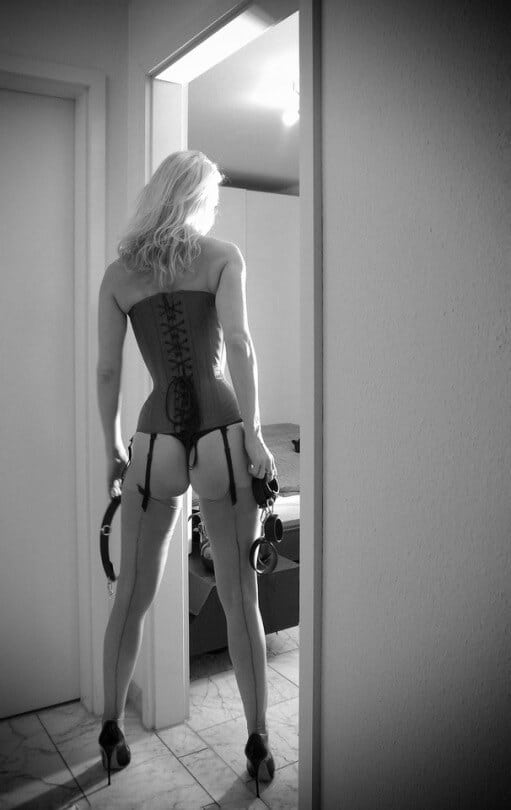 I’ve been wanting for a while to play a mean mistress scene. My latest subby playmate had an immediate response when I mentioned it: “I’m up for it!”

Goddess is waiting in

We had some preliminary discussions about what I’d like to include and what I wanted the scene to feel like. I wanted to appear unbearably cruel. I wanted it to be the sort of scene where onlookers–if there were any since this was a weekday afternoon at the dungeon–might be thinking, “OMG. What a bitch! I can’t believe he puts up with her shit.” I wanted him to feel pain and shame, but to know that, underneath it all, it was a big inside joke between us. We both have a strong philosophy that it’s called PLAY because it’s supposed to be FUN.

He picked me up, and on the way there we talked a little more about it–safeword, limits in this context, expectations. I gave him three rules: 1) not to smile once we entered the club, until the scene was over, 2) not to talk except in response to a direct question from me, and 3) to call me “Mistress” in the scene only. It’s not a title I take lightly, and I have never let him call me that before. But how could I be Mean Mistress without being called “Mistress”? It seemed unthinkable.

After he disrobed, I cuffed his hands behind his back and told him to stand facing a door (there was no corner handy). I made sure to choose a place on the cold tile, rather than the carpeting. I went to organize my things a bit. By this time, I could feel my system revving up into topspace.

Oh, it was great fun. For an hour and a quarter, I mistreated him. I berated him and barked orders. I pulled him around by his hair. I beat on him–mostly on the ass, mostly with a long leather paddle. A few other places got some mistreatment; I only punched him in the gut once. I also abused his C&B intermittently, mostly with manual crushing and with blows from a flat wooden spatula. Though now that I think of it, I seem to remember the leather paddle visiting that area as well. It gives me the shivers remembering the moans I elicited with my ball-crushing hands. This boy is not terribly fond of pain. But he IS terribly fond of pleasing this domme, who enjoys inflicting it.

At one point, I decided to add an endurance test to the mix. I told him to squat, just to see how long he could do it. When I knew his thighs were good and tired, I fetched a glass of water to set atop his head. I let him squat a while longer, then lifted the toe of my boot, with an order to kiss it, to his mouth. In his unstable state, the slight motion required by the kiss inevitably sent the water tumbling down. Heehee! He looked crushed and desperate. He was disappointed in himself and wondering what punishment was to come. While hollering at him, I got in some good whacks on his ass and thighs, then pulled him by his hair to a standing position. “Go get a towel!” I screamed. Still handcuffed, he chose to retrieve the towel with his teeth. He did an admirable job using his head to push it around on the floor. He eventually managed to mop up the puddle, listening to me laugh at him the whole time.

As a reward for his exemplary service up to that point, I decided to give him a little break. I placed him in a standing cage, face in, looking at the wall. Ah, but he just thought it was a break! After a few minutes of rest for ME, I sidled up to the side of the cage and started whispering. Private things, degrading things. I know his buttons. I know how to make his face flare hot with shame. I told him to look at me, gazed fiercely into his eyes, disassembled him into his constituent parts. Then walked away and left him to think about it all.

When I returned a few minutes later to take him out of the cage, his hands felt too cold. It was the only time we broke character. I checked in with him to make sure the cuffs weren’t too tight, and that he wasn’t too cold overall. He assured me all was well, so we moved on to more kneeling, face slapping, CBT and general abuse.

Each of the three rules was transgressed during the scene, resulting in excellent opportunities for punishment. Since he usually calls me Ma’am, he slipped and called me that early on. It was when he was walking away from me to take his clothes off. “Get back here! What did you call me?” I shouted after him. Then, WHACK!! Earlier in the day, we had a funny conversation about Beavis and Butthead. So at one point while he was mopping up water, I pulled him up by his hair and said, “I bet all these people think you’re a butthead!” Sure enough, he couldn’t keep a straight face. WHACK!! As to the not talking, he slipped only once, when he politely said, “As you wish, Mistress.” But–I hadn’t asked a question! So, WHACK!! A bigger problem for him, actually, was trying to answer questions when I did ask them. He was so spaced out and confused, that as I drilled him, he was frequently unable to summon up a response. I’d wait for a second or two, then scream, “I asked you a question!” WHACK!! I repeated the process as many times as necessary to get an answer out of him.

By the end of our scene, he was uncuffed and on his back. I was sitting on top of him, slapping his face and taking my spatula to his nipples. I spoke to him contemptuously, using more ammo from his psychological armory, to which he has given me the key.

He broke. I could see it in his eyes. “Are you going to cry?” “Maybe, Mistress.”

I leaned forward, cradled his head in my arms, told him to hold me. “Good boy,” I whispered in his ear. He began to sob as I caressed his head. Every time the sobs subsided, I would whisper another loving tidbit, taken from that same armory he’s given me entrance to. Finally, he lay still. I rose to get a sheet to cover him with.

I lay down beside him, and for a long time, we barely moved. I needed to come down, too. The feelings were so intense that I had been shaking during part of the scene. I watched him; his eyes were closed. Slowly, he began to come to, and he opened his eyes. “That was FANTASTIC.”

We sat on the low futon we’d been on, decompressing and talking to the bystanders a little bit about the scene. Fortunately, I had given the staff a heads up, because we found out that a new club member was there, and had asked if he should stop us. This information elicited a high-five between me and the boy. But the most hilarious moment of the day came when the boy, referring to his aversion to pain said, “But a scene without pain is like musical Oklahoma! without the Judd Fry character.” It has been a long time since I laughed as hard as I did when I heard that.

It was beautiful to have taken this journey together. I went to a scary, scary place, and came back alive. He got to do the same. Eventually, we packed up and he took me home, stopping to get a decaf mocha on the way. The milk and chocolate helped replace the adrenaline that had since drained out of my system, leaving me shaken and tired.

Later, he told me that they had been tears of joy.

Last Updated on 4 weeks by pseudonymous