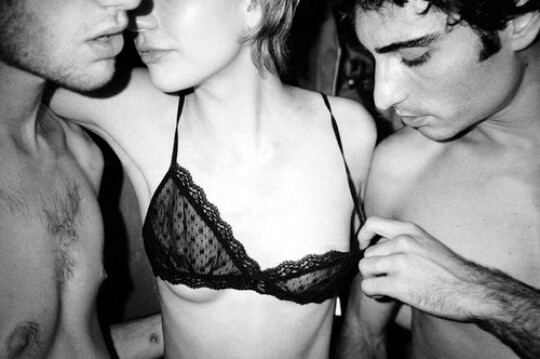 They had talked about it for a long time and she was finally ready to give herself to him fully. She agreed to do whatever he wished, with whoever he wished. She agreed that he was free to share her in any way and with anyone he wanted. She would be his toy to be used for his pleasure.

It had been a few weeks since they had made the agreement. He came home and told her that he had found someone he wanted to share her with and that he had set up a date for Saturday. Part of their agreement was that she would know nothing about this other person until that encounter. She had agreed that he would pick the “who” and she would be good with whoever he picked. She wouldn’t even know if the person was male or female. All she knew is that this person will have to love to play with titties. That was also part of the agreement that any encounter they had would have to focus on her tits. In order for it to be best for her, she would need her nipples sucked and twisted and pulled. She wanted them slapped with hands and cocks. Those things made her incredibly wet and aroused. She was looking forward to being teased and pleased.

Finally, Saturday was here. She woke up tingling with anticipation. Her nipples were aching to be touched. She resisted the urge to touch them herself. She wanted to wait for a new touch. And that made them ache even more. She couldn’t wait and spent all day getting ready, keeping her occupied and aroused. Her husband came home and told her to be ready by 6:00. Little did he know that she had been ready since 2:00.

Six o’clock came around and they left to meet up with her mystery date. Her panties were already getting quite wet and she hoped that it wouldn’t be too long before she could take them off. Hubby told her that they would be meeting at a hotel. She was glad to hear that because he had insisted that she wear nothing but lingerie under her long coat. He couldn’t wait to show off his toy.

Keeping with the mystery, she was blindfolded before she entered the hotel room. She wouldn’t be able to see this person so she would only get the physical sensations that they could give her. She liked not knowing who was going to be playing with her titties. However, she did smell cologne, so her first instinct was that it was a man and her pussy tingled at the thought of having two cocks to tease and please her. She imagined sucking on one while her nipples where being slapped by the other. Finally, the wait was over. Hubby helped her take her coat off and offered her to his new friend, saying “Would you like to play with my toy?”

She was led to the bed and told to lay down. Her hands were bound to the headboard above her head. She felt a hand grab at her clothing and rip it off to expose her aching nipples. It wouldn’t be long before they had some attention. Again, she tingled with anticipation. As she lay there, she felt the occasional light touch on her nipples. It drove her crazy and she longed for more. Before long she felt a tongue on one then the other. Both of her titties were being licked and sucked on. Her pussy was swollen with desire and her panties were soaked. She was in heaven.

The sensation of so much attention on her nipples had her wondering if she would be able to cum just by nipple stimulation. She was beginning to feel it was possible when she felt a cock against her face. She angled herself to get it into her mouth and she heard hubby say to slap her tits with that cock. While she was sucking on that nice hard cock, she felt the other cock slapping her rock hard nipples. She assumed that the cock she was sucking was her husband’s but she wasn’t quite sure. It didn’t really matter. She was enjoying herself. Then hubby said to switch. She felt the other cock approach her mouth, ready to be sucked in and enjoyed. She loved how it felt getting her nipples slapped by a nice hard cock.

They had been ignoring her pussy while they focused on her tits and their cocks. But now she was aching to be fucked. She wanted a cock in her mouth and a cock in her pussy. She wanted both men to give her their loads. Hubby must have felt her desire because he told her it was time to be fucked. She would continue to suck and tittie fuck one cock while the other was buried deep in her aching wet pussy. She thought she might orgasm just from those words.