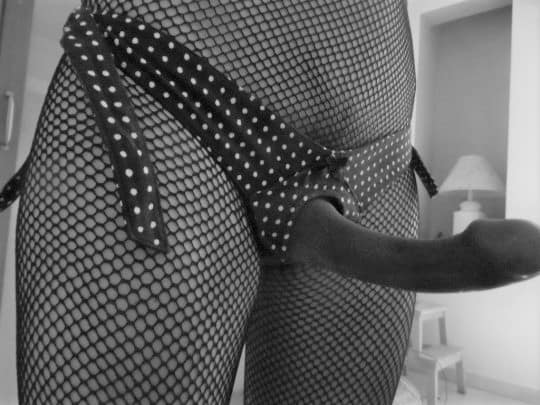 We’ve all got our kinks. I enjoy it when a woman straps on a large cock and fucks me in the ass. I’ve never thought it was normal, and I do feel ashamed of my needs from time to time. The shame hasn’t lessened my desire for this form of submission. I’ve always known I needed it. Ever since I first experienced it.

My first time was actually not my idea. My college girlfriend and I were experimenting with BDSM and she found she enjoyed the dominant role. After we graduated from college we ended up moving to different cities. We tried to make it work, but the distance was forcing us apart. She suggested to me that I submit to strap-on play so that she could demonstrate to me to whom I belonged. I agreed to try it. She scheduled a flight to come to visit me and I visited the sex toy store to buy the instrument of my eventual defilement.

The two-week period I had to wait for her visit was filled with fear and doubt. I was focused on two main questions: how much would it hurt, and would it make me gay. The night of my deflowering had the tell-tale passion, awkwardness, and pain that is associated with most women losing their virginity. She put me on all fours, tied my arms and legs to the bed frame, put on her cock, and moved behind me.

We broke up not too long thereafter, but the experience stayed with me. I kept reflecting back on it over and over again. Perversely, I had wished for a more painful experience. One that could more successfully make me feel degraded and broken. In my fantasies, strap-on scenes became a complete role reversal where the woman would painfully fuck me until she came. I started to try to create just such an experience with the women I dated, but I never found someone who had the same desire to defile as she did.

My life as a submissive man was probably characterized by Shel Silverstein’s children’s book, “The Missing Piece Meets the Big O.” You wander through life just not feeling complete. You do the things you’re supposed to: earn a living, find a girlfriend, stay in shape. But you feel really empty inside. You keep wishing that the significant other would just take charge in the bedroom instead of demanding that you ravish her.

That’s the way we submissive men seem to go through life. Doing what we’re told, but paradoxically wishing we were told more to do by our special lady. This lack of fulfillment eventually leads to unhappiness. Life feels empty. You start to feel that you’ll never get what you really want except perhaps by seeking a professional. Of course, this state of “quiet desperation” is not unique to the submissive men in the world. In fact, it seems part of the human condition. Few people seem to achieve real happiness with their lives.

We’ve talked about my strange desire to be denigrated and broken down by the experience. She’s helping me come to understand where it comes from and why I want it like I do. But understanding where it comes from doesn’t change the fact that I want it as I do. I can tell that she wants it, too. Sometimes, when she’s talking dirty to me, she tells me she’s going to cane me until I’m sobbing and then fuck me silly. When the sex haze wears off, she denies that she’d ever want to engage in play that heavy, but I can tell she can. She’s taking me along a predetermined path towards the result she wants.

Her favorite part is lubing me up. She has me right where she wants me. I’m bound up and helpless and she’s looking down at me as she’s stroking lube onto her shaft. She tells me how much I need the fucking that she’s about to give me and assures me that she’ll be gentle. I can see how much she loves the power of that moment reflected in her eyes. Often the anticipation has built up so much that real fear begins to overtake me. I start to shiver and my teeth chatter even though the room isn’t all that cold. Intellectually, I understand what’s about to happen to me, but, on a more primal level, I’m very afraid of it. It’s strange.

At those moments when I’m gripped by real fear, she comes and cradles my head in her hands. She nurtures the frightened little child on display in front of her and tells me everything’s going to be all right. She gets me to calm down. Then she moves back to right where she was and starts lubing up my ass. Sometimes, I beg her to stop. Sometimes, I don’t. Regardless of what I say, she continues her work at an even pace. Soon, she’s placing the head of her massive phallus against my ass and slowly starts pressing it in. This is where the power-play really begins.

Afterward, we just lay in each other’s arms. She played with my hair and told me how proud of me she was. All I know is, it’s the most peaceful and fulfilling feeling I’ve ever had. Suddenly, everything seems right with the world.