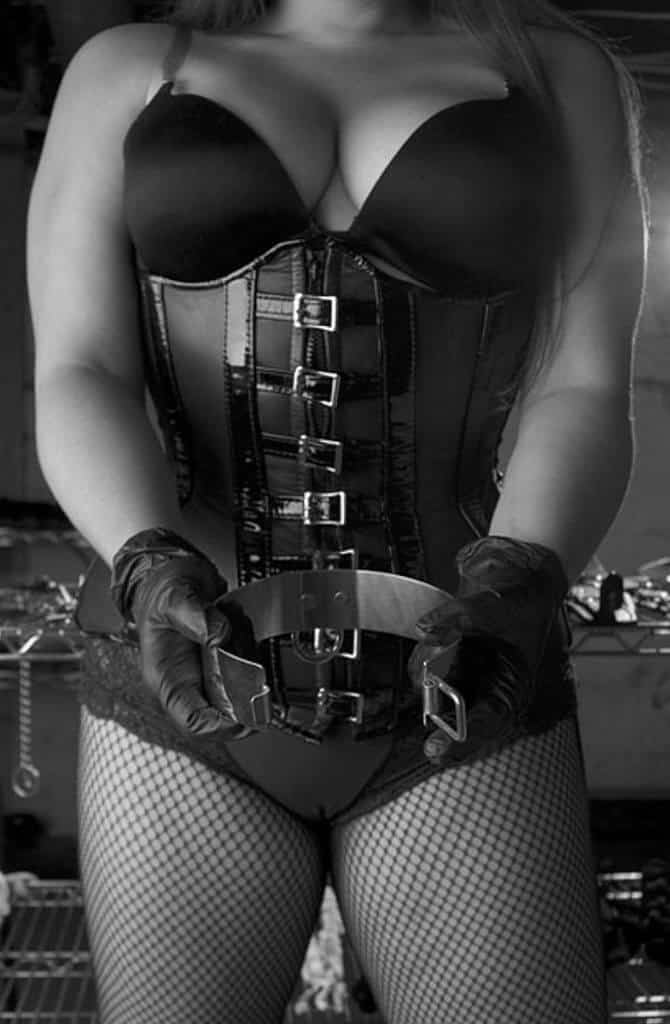 The tiny, submissive girl was being held captive in a house with several men around. She was restrained and watched, often in a dark, cold room under the house (a dungeon?) and used constantly. She had been teased and denied orgasm for days, her pussy was swollen and red, dripping, so much that she was in a trance-like state, waiting for the next move her captors would make…would she be touched again? Certainly. With, or without hope of release? After so many days, she suspected not.

Being useful to the men

At first, when she felt the need taking over, she would beg them to let her cum, for she knew better than to do it without permission. After that first day, she knew the pain they could produce and it was worse than any she had ever experienced. Since that day, she had always been pleasing to them, but they denied her over and over again. Knowing how desperate she was, they would pull away at the last second, quickly penetrating her in one or more of her holes, not allowing her release, but assuring their own. Still, it was some comfort to her. At least she felt useful and wanted.

She was in such a state of hyper-focus during this time, that her entire body was sexually responsive. Even a soft breeze would increase her arousal. Whenever a man approached her, she immediately became fearful that she would be hurt again, yet more excited sexually, hoping he would use her in such a way that she could find even accidental or partial release. Use her, they did, but the release never came, though she moaned, begged, even cried in total frustration. Her swollen womanhood ached painfully.

Sometimes it seemed they enjoyed amplifying her anguish. They teased her terribly many times a day, doing all the things they knew she liked the most, then hurt her with pinching, choking, beatings, needles and forcing large things into her small body orifices until she screamed and cried. Then the teasing would resume again.

All I want is one good orgasm

One day, in frustration, she pulled and struggled against her restraints, shouting that she couldn’t take anymore and insisting that she had been good and deserved to cum. She knew this was highly unwise but she couldn’t stop herself. All the men came to watch, then each brutally raped her tiniest orifice, one after the other. It took hours, though she was allowed to drink water, and sometimes their piss, from a bowl on the floor. Afterward, when she was nearly unconscious, they strapped her to a metal table and inserted needles into her lovely, pink nipples and a metal clamp on her tortured clit, and electrified her until she screamed so hard she lost her voice and finally passed out. Then they whipped her until she had raw, red marks on her skin, and left her on the cold, hard dungeon floor.

The next day she woke up in a puddle of cum and her own blood leaking from her, needles and clamp still on. Her poor clit ached viciously and she began to cry immediately. She looked up and saw several men standing over her with their cocks out. As they pissed upon her, the warmth was little comfort, as her sore nipples and whipped skin burned from the salt of their fluids. She cried like a baby for a long time, until all but one of them left her there. This one took mercy on her and removed the clamp (mercifully, he did it slowly, but that did not stop her from screaming her throat raw) and pulled out the needles, gave her a bath, kissed her tear-filled eyes, and tied her to a soft bed where he used her mouth gently. She gratefully drank his man-fluid and fell into a deep sleep.

She awoke an hour later, refreshed and ravenously hungry, and the kind man came to her with a small snack and water, which he fed to her in bed. She looked adoringly into his eyes in grateful appreciation and tears welled up again. She had been traumatized by the pain, abuse, and neglect, and had not realized the emotional anguish she felt, only the physical pain, up to now. The man became aroused at the sight of her tears and kissed her as she cried.

He is a kind sadist

“Good girl,” he sang softly, caressing her face and hair, and then taking a handful of it, he pulled firmly and tilted her head back till her mouth opened. She sniffed and blinked at him.

“You are beautiful,” he said, “and I am feeling kind toward you, but I am a sadist, which means I take pleasure in giving pain, especially to beautiful little girls like you.” He let go and unzipped his pants, producing a very large, hard cock. There was a drop of pre-cum at the end.

She sighed and began to cry again. She couldn’t decide if she was frustrated over having to wait, or relieved by the prospect of being allowed to cum…sometime soon.

“No! NO! Please!” she called, wishing the whole time she could say yes. He pulled the vibe away and she again cried in dismay, her hips pitifully humping the air.

The man untied her and turned her over, placing several pillows under her hips. He took off his belt and as he did, she could hear it being pulled through the loops. “Please,” she sobbed into the bed, knowing there was no use.

He beat her ass brutally, making her scream, beg, squirm, kick, curse, and cry, and then shoved his huge, hard cock into her aching ass and pumped her for a long time, stretching her aching anus and making her scream and cry the entire time. Finally, he shot a huge, wet load into her and lay there on top of her for a few minutes afterward, not saying a word. She wanted him off of her; she could hardly breathe. Finally, he removed himself.