Skip to content
HomeBSDM – all you need to know about

BSDM: Multiple acronyms for Bondage, submission or sadism, Discipline or Dominance, and masochism. Frequently used as an all-inclusive abbreviation indicating anything pertaining to the “kinky and power exchange based lifestyle”, often including fetish, although it isn’t part of the acronym.

On most cases on will find couple subsets of the complete BSDM term (definitions are mostly from Wikipedia):

Here is a little video to explain the term :

Why do BSDM activities appeal to so many people? 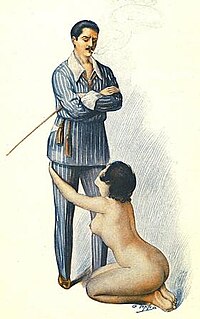 BSDM is as part of one’s sexuality. Sure, one can argue that kinky activities do not have to include sex (think mistress/houseboy as a prototype example of a strictly non-sexual BSDM relationship), yet the underlining drive for BSDM is still one’s sex drive.

The reason why a lot of people like bsdm is as a way to experiment with dominance and power. For a submissive, having control over your life or your body taken away can be very exciting. You experience some fear from the unknown and you don’t have anyway, to stop it. That uncertainty and fearfulness that comes from giving up control is a very powerful feeling.

Another aspect for submissives is that surrendering power to another person is a liberating experience. Freedom and responsibility are two sides of the power exchange dynamics. While freedom feels good, liabilities (and life in general) are often stressful. Submissives get to feel the joy of freedom by giving it up to their dominance, no responsibility and therefore no stress that comes with it, if only as a play. So long as they are being controlled, they no longer have to worry about day to day issues and challenges.

Control is also a big thing for dominant people but from their point of view. Receiving control over another person’s body or sexuality can feel very empowering. The rush you get when you have authority over someone else, while they are actually happy and aroused to submit to your will, can be very exhilarating.

Fetishes and play are very important elements of bsdm.

Acting out a fantasy let you live as your alter ego and allow your mind and mojo to get free as if you are someone else. Role-play and Fantasy are highly common practices of bsdm out there because it has such an obvious appeal. Letting people leaving their secret dreams is connected somehow to their pleasure nerves. Even people who are horrified by some acts like bondage and pain play can usually see the appeal of role-playing in the bedroom. Seeing Halloweeny’s sexy costumes is kind of a perfect proofe

Incorporating fetishes into the power exchange dynamic highly enhance the entire sexual gratitude. For example, allowing a foot fetishist to crawl down and lick the foot of his dominance partner allow the two to mix the control aspect with the object of interest for the submissive one.

The Kinsey Report estimated that 10% of the population at the time had some level of kink or fetish interest.

By almost anyone’s standards, being tied up, spanked, and having rough sex definitely fits inside the umbrella.

You’ll find that parts of the BSDM community are more focused on D/s than rough sex, or, more precisely, tend to assume that D/s is an inherent part of what anyone who is into BSDM obviously must want to do. There are times when that turns into people being dismissive of people who “just” like rough sex, or are “bedroom only” or aren’t “real” or “true.” Some people make the mistake of using Dom and sub as generic terms for everyone who is into BSDM, and then, perversely, put down people who never claimed be either dominant or submissive for not being “real” Doms or “real” subs. That’s a reality to be aware of, but only for the purpose of knowing that we all don’t feel that way and you can usually safely ignore the Followers of the One Twue™ Way.

Many people who happily enjoy getting kinky and rough without a lot of protocol or D/s find that they still enjoy being part of the social aspects of the community, either through social events like munches or attending play parties and fetish events. Some of them do so and make it clear that no, they are not Dom and sub, but yes, they like it rough. Others find it less annoying to simply employ the “when in Rome…” idea and adopt a minimum amount of D/s behavior so they feel they blend in without rocking the boat. Some find that announcing they are both switches lets others figure out how to interact with them without making any brains start ratcheting. Either approach is perfectly fine.