She wore nothing but sheer white crotchless panties. She knew they contrasted beautifully to her golden skin. The girl was tightly bound face up on the bed– her arms were pinned to the sides of the bed with leather cuffs, and her legs were cuffed to the corners of the posts. She wore a white-feathered mask over her eyes. Her Mistress had told her that she would be tested this night, and her nipples were already swollen and hard with anticipation.
The Lady returned. The girl could hear her opening and closing the door. The Lady had brought someone with her. She strained to hear their muted voices as they whispered back and forth. A soft gentle music began to play and the girl felt someone’s hands on her. Warm and scented they began to glide down her chest. They circled around her breasts, down her stomach, and across the tops of her thighs. They removed her panties. The girl couldn’t tell if they belonged to the Lady or the other. As the hands continued to massage her, she decided that she didn’t care whose hands they were. The hands continued to massage lower and lower all the way down to her feet. They released tension and stress the girl hadn’t realized she’s been holding. As the hands moved up, they worked out knots in her calves. The warm oiled fingers moved back up to her torso. Unexpectedly, her nipples were pinched hard. They were plucked until the peaks were stiff and standing proudly!


Mistresses into tease and denial near

The girl bit her lips and moaned as she had been told not to cry out loud or cum until she was given permission. The hands retreated from her breasts, massaging her as they had before. Over her stomach and down her thighs the hands oiled her, leaving a warm and scented trail. The hands moved closer to the open vee of her legs and the girl lifted her hips in invitation. A single oiled finger moved down the cleft of her mound. Again the girl lifted her hips but the finger moved away. The girl groaned in her frustration.

Something cold and wet touched her lips, a sliver of ice. As the ice slipped into her mouth a warm wet tongue followed it. The girl tasted and knew it belonged to the Lady. Their tongues dueled for a few moments, then the Lady’s tongue moved lower to the girl’s jaw and then her neck. The Lady nibbled and sucked the girl’s neck raising goosebumps. As the Lady nipped her, the girl once again felt hands on her breasts. They circled her nipples and tweaked them. The girl arched up hoping they would pull her nipples harder. They were pinched and pulled severely and the girl loved the pain it caused. Just as the girl was beginning to truly luxuriate in the pain, everything stopped. The hands moved away, the Lady left her neck, and the music stopped. The girl almost wept. 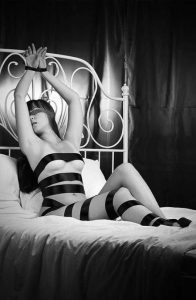 The girl was moved. She was rolled onto her stomach, her knees were drawn up and her hands were pulled forward. She has bound to the bed again. The music came on, this time it was harsher. Cymbals thundered and drums thrummed a primal beat. The girl squealed as she felt a tongue on her pussy. It moved from the base up to the top of her clit. As soon as it reached the tip, she felt the first whiplash. She didn’t know whether to groan because of the sting or moan due to the tongue. She tried to arch up into the sting of the whip, but she was bound too tightly. She could only wait. The lips had moved up to her nipples. They were sucked and nibbled almost too gently. It frustrated her. The whip came again, and she tried to move in such away so that it would last longer. She truly loved the feeling of the lashes on her back. She loved hearing the crack it made as it was lowered to her. She also remembered what the Lady had said about being tested. She reveled in proving her worth. The 3rd.the 4th…. the 5th lash fell…she wanted it to continue as every time the whip came down, either her pussy was fondled or her nipples were tormented. She wallowed in the sensations. The smell of the leather tips, the sting that they produced, the hands-on her pussy, the lips on her nipples. all combined into a frenzy of sexual heat. She wanted, needed the release of cumming. She knew that the Lady knew of her heat, she always did.. She began moaning. she was supposed to be quiet, but the yearning was too strong. The girl began to beg. she needed to cum..she needed to tell the Lady how good, how hot she made the girl feel. The Lady had told her that she couldn’t cum until she had permission. She needed to hear the words. the words that would make everything all right. The girl moaned louder trying to move..to jam her poor hot pussy against the fingers that slammed in and out of her. She squealed as the lips moved away from her nipples. but emitted a low deep cry as the fingers were replaced with a hot hard object. The girl wasn’t sure what it was that probed her so deeply but she didn’t care. All she knew, as she slammed her dripping wet pussy up and down on it. It filled the empty space that was so in need. The girl felt hands on her hips…aahhh it was the other that the Lady had brought. It was a man’s cock exploring her hot little cunny. She tried to slam herself back against the cock, but she was cuffed to the bed and couldn’t move enough. The hands that had held her hips just a moment earlier moved to cover her breasts. Finally, the Lady said she had her consent to cum. Luxuriating in her helplessness she was pumped and ground into a screaming orgasm. She arched her back as much as she could and felt the throbbing and clenching in her pussy. As she came, the hands moved again and pulled and pinched her nipples, further inflaming her. They brought her to a peak she’d never felt before. Quivering and shaking the girl collapsed as much as her bonds would allow. The hard cock withdrew from her. Her bonds were released. She was cuddled tenderly until she came back down to earth.

Once again, ice passed her lips. Warm and tangy, the same tongue followed the ice. The girl was loved and petted. The Lady was obviously not upset that the girl had not been quite as she had been told; she felt the happiness of the Lady. The girl realized that she was sandwiched between the Lady and the other. The cock was throbbing against her ass. The girl hoped that the test was not over yet, she still felt the need to prove her worth. She recognized that it wasn’t when the Lady told the other to move the girl back to her first position.

She was bound back to the bed, face-up, with her arms and legs cuffed firmly again. A weight was put on her chest. She recognized it….it was the other. He seated himself on her breasts facing her. She felt the hardness of his cock against her lips. He brushed it back and forth teasing her with the smell of it. The girl licked as much of it as she could reach. Up and down, she tasted him. She opened her mouth hoping he would give it all to her; he did. Sliding most of his cock inside her mouth, she tongued down the entire shaft. She delighted in hearing his moan as she sucked back up to the tip. As he fed her his cock, she felt her cleft being touched again. Her lips were spread wide and she could feel fingers being inserted. Her juices began to run again. She lifted her hips as the fingers slid in and out of her cunny. Between sucking the rock hard cock and having her pussy toyed with she got hotter and hotter. She began to make gurgling noises, all that she was capable of, with the cock in her mouth. The other moved and withdrew his cock from her straining mouth. He poured oil over her tits and shoving them together, started to fuck them. Squeezing her tits tightly, he ground his hard cock through the space that was left. The girl was downcast that he had not cum in her mouth, but the fingers moving in and out of her pussy canceled some of those feelings. As the fingers jammed in and out, her pussy started to throb. Once again, she needed her release. She moaned and bucked her hips, inviting the invasion of the others. Again, she begged the Lady to cum. This time the Lady wouldn’t give permission. The girl was shaking, needing to have an orgasm. Just as the girl thought she could no longer stand the pleasure, the other moved and slammed his cock into her. The Lady gave her the words she was so desperate to hear. Cumming hard, the girl screamed her fulfillment. One last time the cock slammed into her. One last time the other jerked and came. The man pumped her until she was spent. Again, the girl was loved and petted until she came back to earth. When she was capable of thought, she hoped she had pleased her Lady. The Lady speaking softly and tenderly assured her, she had