‘You are in trouble’ …..that was what the message had said and now he was standing outside her front door, feeling anxious.

He knew what the trouble involved. The evidence was in his pocket, screwed up but unfortunately, and clearly, semen-stained.

He was burning with embarrassment now at the imminent prospect of having to show her the offending item. There was no question about what would happen. It had happened before. That didn’t make it any better.

Very soon, he was going to feel very ashamed…and that would be just the start of it.

She opened the door and regarded him coolly…her calm gaze made him nervous, she didn’t get angry but she made his stomach knot up. Desire and nerves…a potent combination.

She held out a hand and with eyes downcast, he handed over the black lycra pants, simple male trunks in a thin soft lycra fabric, and sadly from his point of view, showing signs of male misbehavior.

Any sexual release she had not specifically demanded was punishable and he knew she would make him suffer.

Her expression was disdainful and then determined…she said simply ‘Strip’. That one word and how it was said spoke volumes.

She would remain clothes, just in her casual jeans and tunic and he would be vulnerable and bare and soon over her lap, to be spanked and corrected firmly.

Whilst he disrobed, she made herself comfortable in the middle of the large leather sofa.

He walked over to her and felt bashful…despite their intimacy, she could do this with ease. 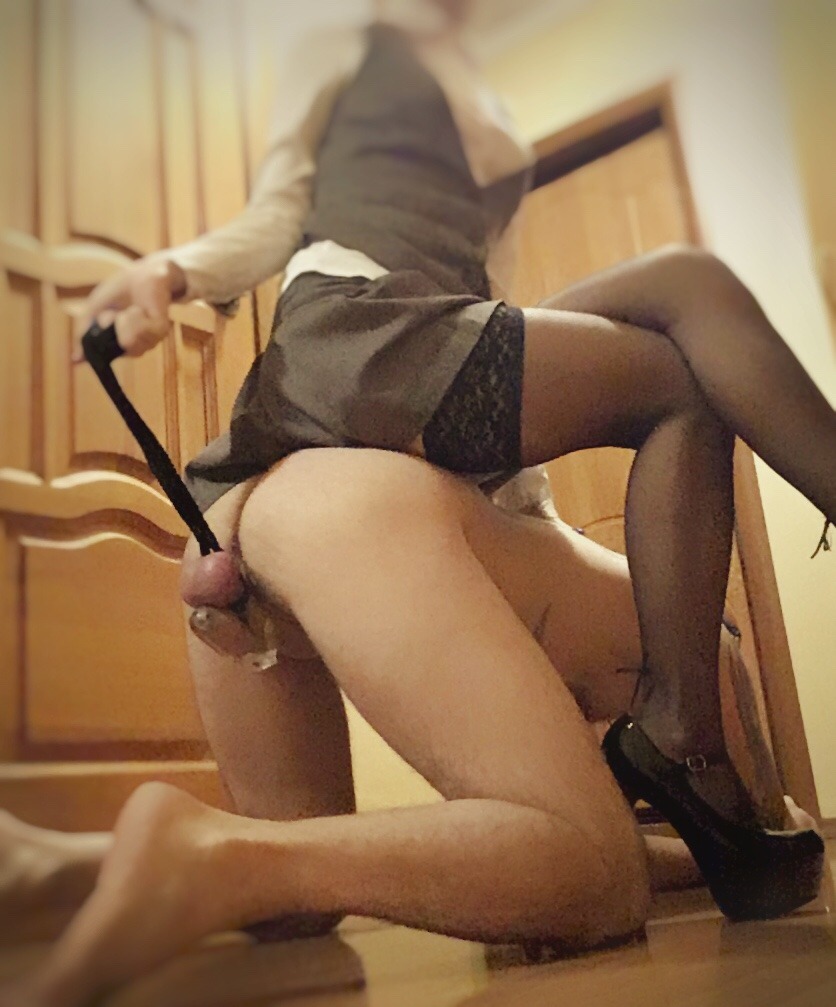 As he walked, his penis stiffened into life and added to his self-consciousness. His submissiveness was brought out of him simply by her presence. Around her, he could not imagine even trying to be defiant. She was calm, assured and in control and he was descending into a state of mild panic. Her spankings were not vicious but firm and lengthy and normally involved a verbal dressing down for his sexual naughtiness.

‘What is the meaning of this?’ Her hand held out the rumpled and soiled underwear.

He thought briefly of saying that as she had kept him for over a week without an orgasm and had teased him mercilessly each day, it was hardly surprising some semen had leaked out at night. He knew though, that would sound as though he were blaming her and trying to mitigate his own behavior. That would be a mistake. Her view was a sexual release was disobedience if she said it was and that was that.

He sighed and realized he would have to confess and apologize. His heart raced a little as he began to offer up his contrition. It had, as he had always known, no effect upon the outcome.

She patted her lap and motioned for him to lay across it.

He settled himself in position and tried to accommodate his erection which pressed down onto her ample thighs. She tutted and slid her hand under him, pushing his cock down firmly. The very touch of her made him shiver with desire.

Her spankings were always humbling, the smacks firm, the stroking in between the slaps arousing and the mixture of the sharp stings with the arousing touches left him weak-kneed and overwhelmed.

Those smacks kept coming until his bottom cheeks were red and sore. Only when he was suffering quite genuinely would she consider it over. He knew better than to make too much fuss or she would carry on and tell him to stop being a baby.

He wished his erection would go away but it had been sustained by the rubbing against her thighs as his bottom was spanked and he moved against her.

It amused her to see how excited he was and she smiled to herself.

‘Go and lay on your back on the bed, naughty boy, spread yourself out nicely’

He always obeyed her and so found him in that submissive pose, offering himself to her.

Securing him quickly, she stepped back and looked upon her boy, all tied down and looking pleadingly at her.

She found his vulnerability extremely arousing and her pussy twitched and grew wet.

He belonged to her, he knew it, she brought out his purest submission and he found her irresistible. She loved teasing her boy, loved it more than she could describe. It drove her quite wild to own his sexuality so completely that even though she tormented and frustrated him to distraction, kept him for periods with no release and punished him for any sexual misbehavior, he adored being hers. He never wanted to be anywhere but under her strict control.

She slowly oiled her right hand with lube and sat next to him, smiling now, a look of rapt attention upon her face and her green eyes taking on the golden gleam her recognized as she dominant pleasure.

Today was only to be a little light teasing, maybe on an hour or so, just slow teasing wanking right up to the brink of coming. He was fairly certain there would be little hope of any release when he had just been punished. However, he could not help but hope and that hope would pain him more than anything. 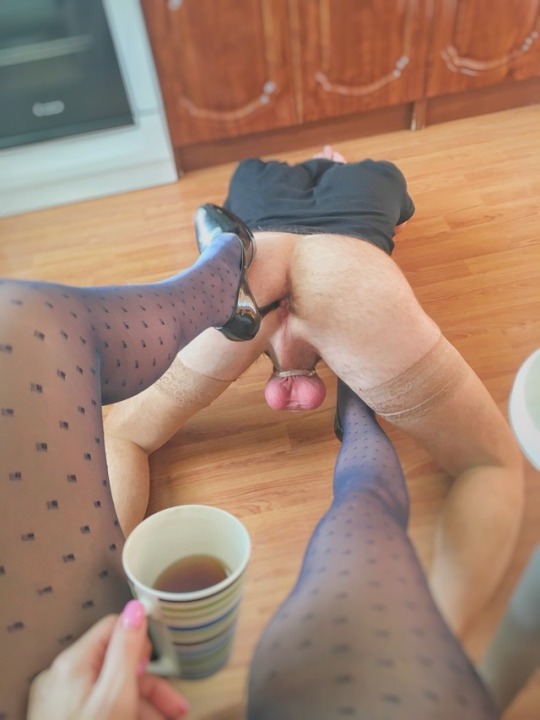 “Oh, sweet boy…don’t be silly, you know that you must suffer many times before there is any chance of release…are you ready to really ache for me…I want you to tremble on the edge, desperate to come and know you must always beg me to stop. If I don’t stop then, well lucky you, but if I do, well, that is only what you asked for, isn’t it? What fun we will have….

He whispered ‘Thank you, Karen, you know I will always be happy with what you decide for me’

She grinned cruelly and proceeded to tease his penis expertly, over and over, some strokes only on the shaft and when she did so his cock head burned and ached to be stroked. Once in a while, her fingers closed over that needy place and he groaned and panted prettily. She bent over his cock and touched the underside with her tongue, a light rasp which sent sparks through him.

She tapped his straining erection with her palm, just enough to make a light slapping noise, not really painful but a surprising sensation, and so she alternated oily strokes with sharp taps and she saw precum beading at the tip. When he was this aroused anything she did push him quickly toward that precipice but she did not want him to experience that pleasure, no, he must snatch at it again and again only to have it taken away.

Tomorrow, she might, if he did not misbehave again overnight, permit him to take his mind off his sexual suffering by licking her pussy for a very long time.