Skip to content
HomeArticleDo you use orgasm control in your relationship with your sub or slave?

For the Dominant Ladies

Do you use orgasm control in your relationship with your sub or slave? If you do, how and why do you do it? If you don’t, also please tell me why you don’t.

For the subs and slaves

Does your Dominant use orgasm control on you? If so, how do you think it affects your service?

When he’s home, he is to ask to have an orgasm. Sometimes I grant him permission, sometimes I don’t. It’s all about control for me. And it’s terribly amusing 🙂

Personally, it is really only arousing for me if the Dominant truly enjoys that power, however. I wish more Women embraced denial.

So to me denial would taint a good sub’s submission and disguise a bottom who claimed to be submissive. The submission I get from denial

Besides, I happen to be quite fond of my husband’s pink parts and enjoy a fuck with mutual orgasms.

I was unswayed. So he got to begging. “I promise, I’ll be extra special good about it. I’ll email you the moment I’ve done it.” etc. And then he must have realized he sounded like a kid asking for a puppy because he finally said “I promise I’ll take good care of it and take it for walks and everything.” Which so cracked me up, I awarded him 2 free orgasms just for making me laugh so much.

From a control perspective, I have trained my husband to orgasm on a count down. I pick a number, start a steady slow count and exactly when I hit zero, he has an orgasm. I’ve gotten him to orgasm from a four-count! That’s pretty fast from down to up to off!

I love denial. Keeping my sub off balance, not knowing if he’s going to finally get to orgasm and then denying him that pleasure simply for my pleasure…it’s just delicious!

The first technique helps the second…I can count him down and, knowing that he’s going to orgasm at zero, stop stimulation just after ‘2’…right at the perfect point every time! I sometimes allow him to finish, mostly so he doesn’t learn to expect and protect himself from being spun off. I keep him honest.

T&D takes time and attention to the sub. Therefore T&D, like all sub-centric activities, is limited to playtime. Those of you who have read my book already know my passion for T&D and the many ways I use it for fun – I do not deny my subs to obtain submission – I agree with Carolyn that a man who is submissive to obtain orgasm is not really being submissive…A sub who does not truly submit to serve (orgasm or not), NEVER would get the privilege of my spending so much of my effort and time as to tease and deny him. 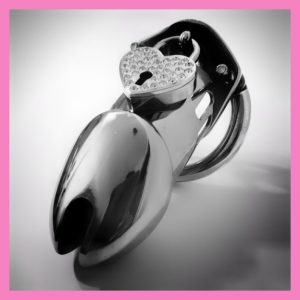 Now, flat out denial I’m not about to do unless he’s being punished for some utter abject stupidity. And denial makes ME very unhappy, because the grand finale is the funniest part of it all, to me. If he doesn’t get the opportunity to get off, then I FEEL frustrated. After a lifetime of restraining myself, I’m not about to do that for anyone else’s benefit ever again. Fuck that.

The point is here that I need a little push every now and then to remind me of my place. I am like a playful puppy or a frisky cat and I can forget myself at times and be a little willful. I am friendly and playful but I paw at the walls and I bite if you hurt me. Is just how I am wired. Enter the concept of Mistress indulging my fetishes BUT she has learned to use them against me to control me and make me fear her punishments. For us Punishments are not playtime or rewards. They are to be feared and they hurt and are not fun at all…ever… I cannot stand agonizing excruciating pain. I hate pain and I have been punished with it and I know its touch well. I like the feeling of a long light paddling but sometimes she really hits hard and fast and it is not fun for me and really hurts. I like bondage and latex a lot as well as being made to feel helpless but when she puts me in heavy latex and bondage for 5 hours with little attention, I am not having fun. I am hot, uncomfortable and bored but it reminds me of my place and the power exchange between us. I like being in chastity because it fulfills a fetish but she takes it to the next level to where I hate it sometimes. That is the key for us so far. She indulges my fantasies but does it on her own terms and so has control over me which satisfies my sexual fantasies which motivate me to be selfless and serve her with all that I am which drives her to make me happy in return. It is a self-feeding dynamic. My Mistress and I are always seeking advice and knowledge from those more experienced than ourselves so feel free to MSG us. We are well-read but have never really sat down and talked with others face to face about this stuff. We are looking to change that.

So this is my premise for how orgasm control is a useful tool in our relationship. Mistress keeps me in steel chastity 24/7. It almost never comes off unless she wants intercourse but those times are pretty rare and so it’s usually my tongue that does all the work. She reaps the orgasm and I reap the reward of pleasing her sexually. I will admit that I used to masturbate a few times a week and so my energy levels and interest waned from time to time. That has changed. I am now given just enough releases to keep me from feeling neglected but just enough that I stay on track with trying to please her with chores, love, affection, and anything else I can think of to make her happy or else I will wait a long time for that which most men (not all men….but most men) crave frequently.

Now I am usually given a special kind of orgasm in my chastity device but it’s not the kind of milking you would normally think of. If you MSG me I will describe it for you. Anyway, being in chastity keeps me very submissive. It just works for us. I appreciate her more and I appreciate her dominance more. I would appreciate it anyway but chastity heightens it so we see it as an improvement. Would I be submissive anyway ? Of course but like bondage or a light paddling, if Mistress is displeased with me she can use it against me without effort to make me suffer by making me go another week or much longer. It helps to drive my submission beyond what I would normally behave like as I need to keep her extra happy to earn my orgasms or milkings. It feeds the dynamic of our D/s relationship. I feel very controlled and she has total control. We are a couple so part of my service includes a shoulder to cry on, holding her when life is trying to crush her, and feeding her soup when she is ill on the couch with a bad cold. She is not a tower of indomitable will made of steel and gleaming thigh boots, she is a human being like me. I do understand what others are saying. I would be a better submissive and/or slave if I had the will power to abstain on my own but so far I have not found that within myself. I do not even know where to begin to be honest.

So in a nutshell, yes she uses orgasm control on me and it affects my service in that I am better behaved because my wanting to be better behaved is assisted and magnified.

I prefer to be on the honor system as opposed to having a chastity device placed on me. Knowing I can physically have orgasm, yet don’t because I wasn’t given permission is a self-test of my discipline and character.

Personally, I find that the ongoing hope and anticipation of being permitted to orgasm tends to keep me more focused on what’s expected of me. In many ways, the daily promise of orgasm without it coming to fruition is more pleasurable than the eventual orgasm itself. Does that make sense?

With other subs/slaves, yes, I have and will again. Either by chastity or simply dictating when they may orgasm. I like to control the sexual side of other males, so I enjoy telling them specifically to not or to orgasm at certain times.