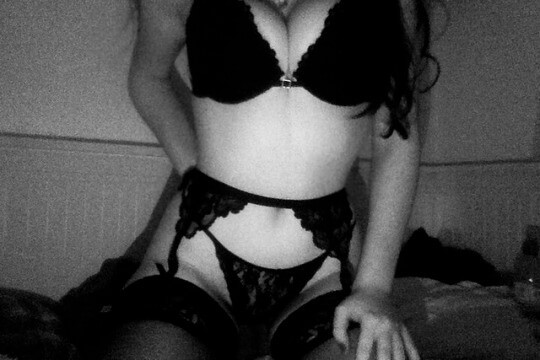 She lays down for a nap and wants to come. But she doesn’t want him inside her. So she tells him to put on his cock cage and then makes him stand at the foot of the bed, not too close. “No touching the bed. No, back further, that’s good.” She lays on her back under the covers so he can’t see and uses her favorite toy. Bit by bit, she adds little sighs and quiet groans. Between her sleep-blurry eyelids, she sees him squirm as his cage tightens. She can’t help laugh just a little. She comes, laughs out loud when she sees the look on his face, and comes again. She rests, satisfied. Remembering that she has to reward him a little, she beckons him closer, closes her eyes, and flicks his little cage with the back of her hand. Then she squeezes his sore balls and tells him, “Maybe some other day I’ll take you out. Now get lost and close the door behind you.”

After he’s been rubbing her back and legs for a while, she suspects he is thinking about sex and devises a plan to frustrate him. “Get up!” she orders him. He stands and sure enough, he’s erect. She grabs the cock in one hand slaps his balls with the other, and even though he jerks and twists away, she manages to get in a second slap, too. “It’s all sex, sex, sex with you, isn’t it?” she remarks, making him lay on his back with his head toward the foot of the bed. She lays back down with her knees up and a heel pushing into his nutsack. She masturbates slowly, first with her hand, then with her toy. All the while she pushes on his balls, now more now less. Once he raises his head to watch her, so she kicks the balls playfully a few times until he lays down again. She laughs, thoroughly enjoying his frustration, now mashing his cock with her heel. As she nears coming she synchronizes her hand and foot movements. She comes a few times, mauling his cock and balls each time. After, she sits up to check and make sure there’s no cum on him. She gloats. “I came, you didn’t.”

His balls are swollen from denial. It may have been 5 hours or 5 days, it doesn’t matter to her. Right now she is feeling merciful and wants to watch him come. She puts on a lovely outfit, taking special care to pick just the right shoes. Then she sits in her comfy chair. First she orders him to kiss her shoe. Then she asks him to take it off and kiss her foot. Then she wonders aloud if he’d lick the shoe, so puts it pack on. He does, then she takes it off again so he’ll lick her toes. He looks confused and pathetic and she has a good laugh at his expense. Then, with him standing in front of the chair, she kicks her foot to play with his cock and balls, rubbing and pushing and jabbing them with the soles and toes and heels of her shoes. She thinks it would be fun if he came on them, but then decides she doesn’t want cum on her beautiful shoes. She holds out her hand and demands he come there. When he does, she presents her cupped hand and says, “Eat it, my beautiful boy.” He grimaces, but swallows the mess and dutifully cleans her hand with his tongue.

She makes him take his pants off, so his cage is just a bulge under his shirt. She ties a string around his cock and balls, up behind the cage, and tighter. Then she tugs on it, leading him around inside the house, and asks if he wants to go outside for a walk. He gets quite stimulated and has to focus very hard not to hurt himself in the cage. She pulls him upstairs and pushes him down onto the bed, lifting up her skirt. No undies. She rubs herself on the cage and on her hand holding the cage. Soon she is vigorously masturbating with one hand while flipping his cage around with the other, mashing his balls with her fist. She comes once, then grabs the tether again and pulls it this way and that, wrapping it around her hand. Then using her toy, she rides to a second orgasm, jerking his stuff around to the rhythm of her hand rubbing herself.

She rides his face while he lays on the floor, facing down so she can also torment his cock. She prods it now and then, or strokes it momentarily with one finger, then ignores it again, focusing on her own pleasure. After getting herself rather hot, she wants something inside her but opts for a toy. So she leaves him on the floor while she lays back on the bed to climax herself. Afterward, she sits on his face again but this time facing up. She talks to him a little bit, then orders him to put his cage back on. He is too hard still, so she takes him to the bathroom and pours cold water over the cock to shrink it down until the cage fits again. Then she plays with it and it swells immediately and uncomfortably, pulling his balls tight as the cock pushes against the cage. She slaps his balls a few times, lightly, and pretends to nibble on his metal-encased cock. He looks like he is in serious pain right now, so she relents and leaves him alone to recover.

She ties him naked to a pole in the basement and dresses down his cock and balls with a flogger.

She wants missionary sex and lets him come inside her.

She takes him out dancing and makes a point of dancing with a big, handsome man. After dancing like crazy with him for a few songs, she goes to sit down but the guy asks for her name and she stops to talk to him, bending in close to say something in his ear. The man’s eyes go wide and he laughs, then whispers something back and gives her a high five. The guy takes his time leaving and watches to see where and with whom she sits. “I want to go home and fuck you right now,” she says as she settles back in her seat. “Me? Are you sure?” The other guy disappears toward the back and she tugs him up out of his chair. Back at home, she puts him in bed on his back and gets astride his cock. “So what were you talking about with that guy?” “Oh that? I told him I was doing a study of good dancers, and I had to know, for scientific reasons, whether he’s got a thicker cock or a longer one. He said ‘both,’ of course, and told me to ditch my date and meet him by the back door in 10 minutes. From the size of his bulge, he is surely much bigger than you.” She fucks him really hard and they both come immediately.

She knows it used to be a fantasy of his to fuck her mouth while she wore a butterfly gag. She orders one online without telling him. She is particularly cruel with him that week. She pulls on his scrotum, hangs weights on it, then takes them off when the swollen nuts hang low and uses his sack as a punching bag. That sort of thing. Another time she hits his penis a little too hard with the wooden spoon while playing. There’s even a little bruise and abrasion. Poor little thing. She makes him wear his cage at night so she won’t hurt his pretty little peen by getting it hard or fucking it. Then she lies next to him in the bed and starts jerking herself off. Feeling bad for him, she decides it’s ok for him to watch, and is pleased to discover that he can’t help himself, even as it gets worse and worse for his junk in the cage. Meanwhile he is starting to wonder if he’s made a mistake getting into this arrangement with his wife. Then one night, when he dreads laying down in bed at all, she opens a box and shows him the gag. She puts it on. Unfortunately for him, he still has the cage on and starts thrashing about on the bed almost blacking out. She manages to unlock him and get the cage off, but he is so hot there’s no way to get the ring off. His balls are beginning to look blueish. She starts to drool now because of the gag and lets the spittle ooze onto his throbbing cock, mushing it around with her fingers. Then she gets her mouth right up by his face, still dripping on him, and grabs his wet cock in her hand, pumping it slow, clenching it tight, letting it slide slowly through her fingers, once, breathing and drooling on him. She starts a second slow pull and then stops abruptly. Taking off the gag she tells him, “That’s all I can do tonight. You can hold it in until tomorrow, right?” She rolls over, laughing aloud, and soon falls asleep